One should not allow the tone of “Frequently Asked Questions about ‘Hypertext'” mislead us into thinking that it is just a parody. The opening poem “Hypertext,” composed of seemingly random words arranged in three tercets, acquires meaning through the explanatory notes that are hidden in the different hyperlinks. And each of those hyperlinks might offer new insights, that become wilder and wilder as the reader picks up new meanings and explanations in the context provided by the hypertexts. The words, naturally, are not random. They are a series of permutations and anagrams of the word “hypertext.”

The text is built using a series of pages that refer to each other through hyperlinks. It uses HTML 4.01 Transitional. “Frequently Asked Questions about ‘Hypertext'” follows a tradition of texts that rely on “academic explanation” to parody a type of discourse that while imagining itself to shed light on a text, actually makes its comprehension much more difficult, if not impossible. Much like Nabokov’s Pale Fire, the story of a double murder, which might or not have been committed by Erica Taylor (formerly Eric Taylor) but that might also be a double suicide of Ellen Richards and Richard Allman, unfolds through the texts. The love story, thwarted by the discovery not only that Ellen Richards is a woman as a result of a sex change operation but also that she was formerly Alan Richardson, author of the poem Hypertext, ends up in the death scene in which the characters were about to reveal their latest research on the text.

Paradoxically, the apparent gibberish of the poem in the opening page of the text acquires new sense through the explanatory links: 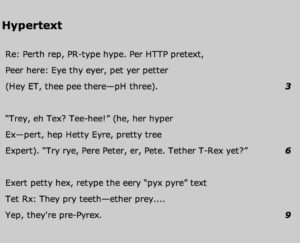 For example, what it means to be “pre-Pyrex” varies from being “on the brink of self-discovery and invention” like Dick Hellton (a character introduced in the commentary) or symbolizes “the ironic transformation of Vietnam to a free-market economy increasingly dominated by consumer goods and commodity fetishism” or becomes a trope that cannot be read without irony. Despite the lack of a basis for any of those claims, a rereading of “Hypertext” makes the reader aware that the phrase “pre-Pyrex” can no longer be read without evoking the interpretations of the fictional critics.   “Frequently Asked Questions about ‘Hypertext'” satirizes academic discourse, textual analysis and academia in general and serves as a criticism of the inanity of much of the work academics do and the pettiness ingrained in the university environment.