This work in progress is a wonderful example of how digital media can be used in an integrated way to create art that transcends traditional media and genre distinctions. As Suzanne describes the concept best in this artist statement.

I wrote a novel, and it was a poem, and I called it Into the Green Green Mud. But coming from an experimental theatre background, where script and performance are distinct entities, the text was only the beginning. How would I “perform” this novel? The standard performance of a novel is justified black text on white paper. But is that really the best way to explore time and love and change and the weather?

Her theater background has attuned her to what is understood as the performative turn, a paradigm shift that for the past several decades has focused attention on the performance as a key signifying act. The notion of script and performance is made literal by HTML works, because they consist of a source code that is interpreted by software and hardware to produce a readable work. As a multimedia artist, Suzanne keenly aware of the analog and digital materials available to her,

The first performance of Into the Green Green Mud is under way, and I’d like you to be a part of it. We’re starting online, with original illustrations, animations, fonts, and music. OddBird will write the code, and Teacup Gorilla will write the music. From there we can make it a reading, a rock concert, a book, or all of these things at once.

Two aspects stand out from this description: its collaborative nature and handcrafted aesthetic. While Suzanne wrote the text of the novel, drew the illustrations, designed three fonts, and has shaped the presentation of the work, she is producing it with two teams of people close to her (brothers and friends) on the code backdrop and musical composition. And it shows. Every component of this project is lovingly custom made, coming together to enhance the original text with a design acumen parallel to Wes Anderson’s distinctive mise-en-scène.

Fittingly enough, the concept of mise-en-scène was appropriated from theater by film theorists to emphasize the compositional nature of filmmaking, emphasizing the blank canvas around which a shot is composed. Like theater, which begins with an empty stage that needs to be developed into a meaningful space by carefully designing, placing, blocking, and scripting every element, so the filmmaker and Web designer need to build each shot and node in their medium to achieve their desired effect. As a programmer with a background in experimental theater, Suzanne uses pure HTML and CSS to arrange each element of this project: text, static and kinetic images in multiple layers, and wireframes to shape and arrange each aspect dynamically in in browser windows that come in many shapes, sizes, and screen resolutions. 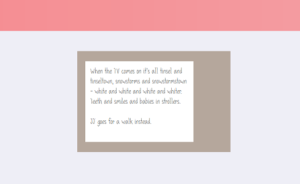 Part of the pleasure of this “novel (with pictures)” is that we can appreciate each layer of this performance as it becomes deployed. Suzanne’s narrative verse is reminiscent of Shel Silverstein’s illustrated books, as are her drawings. The prose and verse are arranged graphically, but also using HTML conventions, such as ordered (numbered) and unordered (bulleted) lists, and formatting as definable characteristics of text. Its whimsical alliterations, metrical bursts, and distinctive voices are enhanced by custom fonts, as can be seen in the example below.

Most of Into the Green Green Mud is displayed as a clean text in handmade fonts arranged near the center of the screen, as can be seen in the image above. The earlier images in this entry show some of the other layers implemented, such as wireframes, images, and animations (though you’ll have to visit the site to see the kinetic aspects in action). This is a publicly available work in progress with fully documented code— a patient performance slowly unfolding over time— so that every time we visit, we are likely to discover a newly transformed page or chapter.

This virtuoso creation by a talented young poet, writer, artist, typographer, programmer, and musician is a taste of things to come as new generations of digital media and code literate creators come of age.