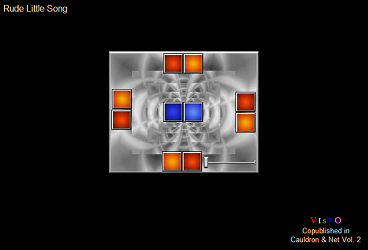 This aural piece is a kind of Lettrist sound poem, because it uses verbal language in sub-morphemic units (with thanks to Melissa Lucas for the term). In other words, the poem is concerned with putting together snippets of vocalized language sounds that don’t carry semantic meaning, all performed a capella, recorded, edited, and spatially arranged by Jim Andrews. The visual composition is as non-referential as the sounds, activated by moving the pointer over the pulsating colored squares.

This rough (“rude”) little gem is Andrews first audio piece produced with Macromedia Director— an important exploration with a digital tool that allowed him to produce works like “Enigma n2,” “Oppen Do Down,” “Nio,” and “Jig-Sound” before Adobe bought out Macromedia and changed the audio engine for Director. For a detailed account of these audio works, read “Visual Music” (pgs. 207-244) in my dissertation, Typing the Dancing Signifier: Jim Andrews’ (Vis)Poetics.