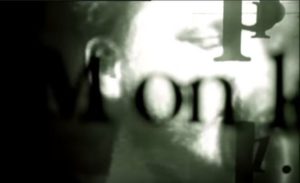 The use of kinetic typography in this video enhances the Surrealist approach to the lyrics. Frontman and songwriter Black Francis has stated that his style of writing consists of ‘’… singing a whole bunch of syllables along with the chord progressions, and they become words’’ and that as for interpretation ‘’A bunch of five words might mean something, or stand for something. But the five words after it, or preceding it, sure as hell won’t have anything to do with them.” The typography in this video emphasizes this approach to songwriting and gives us a taste of Francis’ writing process. None of his songs follow a traditional structure (”I do my lyrics at the very, very last minute. I’m more into making music and coming up with poetic structure,’’ says Francis) and they all tend to be idiosyncratic and experimental, just like this video. Meaningless phrases are animated in the video such as the ‘’ha ha ha ho’’ Francis screams, while the rest of the content is just flashed across the screen at a speed which is difficult to read, especially with the overexposed lighting effect and a font that appears to be breaking. The words flashed on the screen are mostly the band’s name and the song’s title, with the rest of it being too hard to decipher and doesn’t appear to contain the song’s actual lyrics, making the decision to even include text pretty odd. Clearly, the use of typography doesn’t aim to make the audience understand the song better, but rather the opposite—to confuse even more and increase the video’s effect.

The lyrics of this song were based on a Surrealist film by Luis Buñuel and Salvador Dalí titled “Un Chien Andalou.” According to Francis, this film is about “nothing in particular,” which is why he decided to write a song about it. The film famously opens with a girl’s eyeball being slit by a razor, hence the lyrics ‘’Slicin’ up eyeballs.’’ Francis also states that the title is ‘’nonsense’’ and that’s why he wanted to use it , but changed ‘’andalou’’ to ‘’andalusia’’ so it wouldn’t sound ‘’too French.’’  This part is important in the video since the word ‘’chien’’ flashes onscreen practically as much as ‘’Pixies’’ and ‘’Debaser’’ does (and the video also features a dog), but the letters are solid and actually being moved by transparent strings, suggesting a sort of primitive form of kinetic typography even. 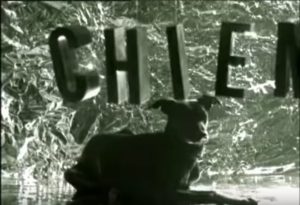 The text in the video may not be the usual incorporation of the song’s own lyrics with visuals, but it definitely serves a purpose in making the video have that trance-like feeling that tries to make the viewer watch it over and over again to see what they can find the next time around.