Eveline, fragmentos de una respuesta [Eveline, Fragments of a Reply] (2004) is a hypertext narrative by Argentine author Marina Zerbarini. It takes its inspiration from two short stories by James Joyce – ‘Eveline’, and ‘A Painful Case’ (1914) – which Zerbarini uses as a springboard for creating a multimedia narrative that brings together photographic images, videos, animations and sound files. Marina Zerbarini, is a leading digital artist from Argentina who has worked across several media, including photography, painting, objects and installation art for some decades, and whose electronic works include some that fall into the e-lit category, whilst others are more properly net art. She created this work in Macromedia Flash, using the ActionScript programming language. Each time we open Eveline, fragmentos de una respuesta different interfaces are loaded, these ranging from bleached-out images of sheets, to extreme close-up photographs of part of a human face or hand, with the image pixelated such that the individual pixels are visible. The cursor takes the form of a butterfly, and, by clicking on buttons that appear across the various interfaces, we activate different content files, including images, excerpts of text, and sound files (these latter containing excerpts mostly of electronic or orchestral music).

The chronological order of the files is not pre-set, and instead, the reader has to piece together the story from multiple stimuli, as s/he reads disparate blocks of lexia, views images, watches videos, and listens to sounds. The two source texts which are the inspiration for this work provide clues as to its possible interpretation. In Joyce’s original short stories, endings are unexpected, and questions left unanswered; in Zerbarini’s narrative, this sense of uncertainty, and of searching for meaning, is re-enacted procedurally, as the reader has to undertake a journey through these multiple sources to piece together the narrative. But more than just a re-telling of Joyce, Zerbarini’s narrative invites us to explore the nature of hypertext narrative and our embodied relationship to it as reader. The foregrounding of the human body through the extreme close-ups means that we have to think through our own affective relationship to the work as we navigate it. And yet… through the overt pixelation, Zerbarini makes us question our own status as human. Is it perhaps our possible transformation into cyborgs as we engage with electronic literature that Zerbarini is encouraging us to reflect upon here?

Doménico Chiappe, a Peruvian-Venezuelan writer and a journalist currently living in Madrid, has written and produced two delightful works of electronic literature: Tierra de extracción (1996-2007) and Hotel Minotauro (2013-2014). His works depict a critical and pleasant voyage to diverse Latin-American landscapes where poetry within prose, and prose within poetry, submerge the reader into hypermedial embedded narratives.

10:01 is a hypertext novel set in a movie theater during the ten minutes running up to the screening of the film. The text was published in 2005 in The Iowa Review Web. It consists of the image of a darkened cinema where black silhouettes sit in various rows. This image serves as one of the possible ways to navigate the text. By clicking on a figure, we read from one to five texts, each of them advancing the narrative. The text can also be navigated by using the time bar, but the reader does not feel constrained to read it chronologically. Each of the characters has its own story, which is told by an omniscient narrator that has access to their innermost feelings, hopes, fears and desires.

Even though critics like Alice Bell, Astrid Ensslin and Hans Rustad describe it as a “Web-based version of Olsen’s print Novel” (Analyzing Digital Fiction, Routledge 2014), the authors state in the credits that: “A print version of 10:01 that complements rather than reiterates this hypermedial version is available from Chiasmus Press.”

The novel is built using a combination of HTML and Flash, which allows video and sound when required by the story. The sounds represent a particularly significant contribution to this work, by setting both tone and pace. The text also presents hyperlinks (although some of them are broken) which alternatively illuminate or complicate it. The brilliancy of this work resides in the shifting tone, from harsh and critical to satirical and funny. If you would like to know how a real shrunken head ends up in a cinema in the Mall of the Americas, you should read it. You might also discover that “America… is a land of excellent pies.”

Minicontos Coloridos  is a collaborative project conceived by Brazilian journalist, writer and teacher Marcelo Spalding in 2013. The short tales are structurally and conceptually associated with colors in a playful way. To access the stories, the reader should mix the primary RGB colors through a pull down menu available on the website in HTML which hosts the tales interface. The website offers three blending options for each of the three primary colors, totaling 27 short tales.

Michael Joyce’s “Twelve Blue” is a hypertext narrative told from different perspectives. It is possible to start reading at many different points and, as the stories unfold the reader discovers new meanings in old sequences.

The Jew’s Daughter patterns itself upon a journey, moving between cityscapes of ports and trains, to internal monologues that outline mythical landscapes more closely aligned with nature. Positioning itself as a postmodern text that draws strongly on modernist roots, the novel plays not only with its self-reflexive embodiment – wherein the changing elements often attribute the same saying to multiple characters, shifting between first and second person, destabilizing the narrative and leading the reader to repeat the narrator’s question of “Whose horrible voices are these?” – but also evokes its own historicity and contemporaneity through multiple literary allusions. 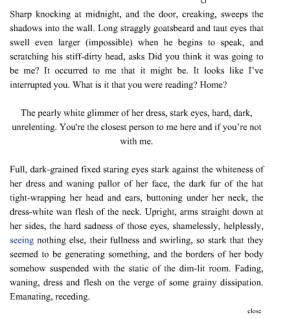 For example, the novel’s fragmentary nature, its use of shifting narrators who are both male and female (who speak in both first and second person) while relying on a primarily male narrator, its constant moving landscape, the intercutting of a bar scene, as well as its play with popular tunes suggests a deliberate evocation of T. S. Eliot’s The Waste Land. Yet, at the same time, the primary male narrator appears rather Prufrockian, hesitant and unsure in his relationship with Eva and longing for more; the text’s abruptly centered lines on the page of prose describe a woman in a pearly white dress that might be Eva and her distance from the narrator. The Jew’s Daughter returns repeatedly to the image of the city and dogs, the singing that seems unrelated to the narrator himself and occurs mostly around him. In yet another parallel, the primary narrator’s return home, his alienated and crumbling relationship with his partner, Eva, his status as an Irish-Jew, all suggests an homage to James Joyce’s Ulysses. The possibility of this homage is further strengthened by Morrissey’s choice to name the novel ‘The Jew’s Daughter’, after an anti-Semitic folk song from the United Kingdom that is quoted in part in Joyce’s book. That is, Morrissey’s text opens itself to multiple possibilities and multiple interpretations – its play with stylistic and narrative conventions emphasizes the need for a plurality in terms of its reading encounter, as well as in any attempt at meaning making. 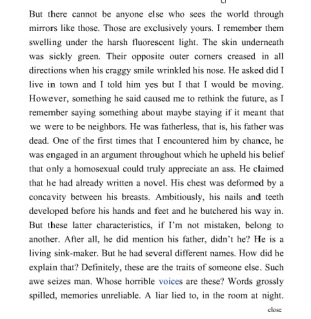 The novel states, “When the sacred builds itself, it dismantles us and then it is up to us to reassemble the things that linger in its wake, the brine and feathers that it scattered when it left… This is because its wholeness is our own. The broken sum of its parts is a great agonist. What are we without our histories? The work exhausts itself against us, and in our impotence we become great.” The Jew’s Daughter thus opens onto not simply discussion of the work as lived experience within our own shared histories, but also the work as a literary and philosophical construct. Given the text’s homage to Ulysses and Joyce’s as well as the text’s own suggestion of a link to Homer’s Odyssey – the questioning of the horrible voices, the repeated singing, the references to sea-journeys and ports, the decoration of the house with small black ram’s horns and oriental anchors, his return to Eva and the troubles that await him –  it’s perhaps worth reading The Jew’s Daughter alongside Maurice Blanchot’s essay ‘Encountering the Imaginary’ which is itself based on Ulysses’ encounter with the Sirens.

In the essay, Blanchot suggests that the narrative is like a siren that beckons the reader towards meaning, that the entire event is a movement towards the distance of its conclusion. However, this promise is never revealed for the ‘truth’ of the siren’s song remains a secret never to be revealed – sailors are unable to survive the encounter, or else can only complete their course by blocking their ears to its song. The narrator’s choice to suggest that the work should exhaust itself against us without reaction would almost appear to repeat the Ulysses encounter with the siren – lashed to the mast and unable to give in, yet willing to encounter the experience – allowing the work to maintain its mystery and learning no truth but that of his singular journey. At the conclusion of The Jew’s Daughter, the text refuses simple meaning-making. For all that the reader is brought full circle in their journey alongside the narrator, the novel retains its complexity and plurality of voices – historical, literary, and fictional.

Note: Follow this link to read the first entry on this work.

Reagan Library might be best described as exploratory hypertext fiction. In this work, Stuart Montfort has created an eerie world, reminiscent of the game Myst and its sequels, which seems to require a particular state of mind, a suspension of disbelief, and a total immersion into a new and unexplored universe.