“…and by islands I mean paragraphs” is a delightful combination of computer generated poetry, mapping and the reworking of texts.  The text is displayed as an interactive map that allows the reader to explore each island and the texts that they generate and regenerate.  It alludes to an earlier piece, “Notes on the Voyage of Owl and Girl” (also reviewed in this site), which also employs a map to structure the text.

In “…and by islands I mean paragraphs” the space is larger than the computer window, vast like an unknown sea, goes beyond the horizon we can distinguish. The reader is forced to explore this vastness in which text recreates itself or is altered by the reader’s own interaction with the islands. It is impossible not to wonder whether it likely that one might find the same island twice. However, a reader that submerges herself in this world ends up too involved in the mutability and the textual permutations and the search for possible repetition becomes less pressing. 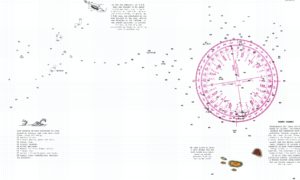 In her introductory text to “…and by islands I mean paragraphs,” Carpenter states:

Their fluid compositions draw upon variable strings containing fragments of text harvested from a larger literary corpus – Deluze’s Desert Islands, Shakespeare’s The Tempest, Defoe’s Robinson Crusoe, Bishop’s Crusoe in England, Coetzee’s Foe, Ballard’s Concrete Island, Hakluyt’s Voyages and Discoveries, and lesser-known sources including an out-of-date guidebook to the Scottish Isles and an amalgam of accounts of the classical and possibly fictional island of Thule. Individually, each of these textual islands is a topic – from the Greek topos, meaning place. Collectively they constitute a topographical map of a sustained practice of reading and re-reading and writing and re-writing islands.

Although Carpenter names many of her texts, others are left to be discovered by the reader: Darwin’s The Voyage of the Beagle or Joan Blaeu’s Nova Descriptio Shetlandiae Descriptio Insvlarum Circa Scotiam (this last one, not mentioned in the bibliography). Some of the islands have names or are named in their accompanying paragraphs. Others are mysterious and their texts reorganise themselves without apparent direction by the reader. Some of the islands rely on a javascript file that controls the behaviour of the text. The rest is HTML. All in all, the code is elegant in its simplicity.

The texts themselves, the islands, have different characters: they can be lyric, factual or a combination of both; but, independently of their own character they succeed in transporting the reader.

“…and by islands I mean paragraphs” is a truly magical piece of electronic literature: evocative and ethereal, without completely giving up the concrete (for which it used the grounding aspect of the map). It allows the reader to explore a world and to discover its wonders and surprises. If you have never encountered eliterature before, this is a wonderful piece to discover a whole new world.

This poetic performance on Twitter is a series of observations focused on the Dart river and its environs in Devon, England. The earliest tweets on this account, which started on November 19, 2009, focused on the practicalities of walking along the river, and rapidly settled into a language based study of the river and its environs. The tweets exhibit a curious mixture of subjective and objective perceptions, writing from a very personal perspective without falling into Romanticism. It is more like Olson’s dictum that “ONE PERCEPTION MUST IMMEDIATELY AND DIRECTLY LEAD TO A FURTHER PERCEPTION,” but captured and delivered over time via Twitter.

The first version of the Know app was named after, designed for, and published a single poem: Lewis’ “Buzz Aldrin Doesn’t Know Any Better.” For version 2.0, he commissioned five poets to produce new poems with the authoring system. Here are some noteworthy observations on how they mapped out the app’s parameters.

The structure of a word cloud from which one can pull lines through touch is a remarkably versatile structure and it would benefit from a version that allows readers to explore it with their own texts and controls, as they did with the Speak app.

This suite of poems by several prominent writers in the e-lit community was written using the Speak app, an authoring system developed by Lewis and Nadeau. This is the first in the P.o.E.M.M series (Poems for Excitable Mobile Media), a series of apps designed to explore the expressive, artistic, and publication potential of Apple’s iOS computational environment, Store, and touchscreen devices. The app opens to “What They Speak When They Speak to Me,” Lewis & Nadeau’s original touchscreen poem for large installations. The app offers other poems as well as the option for readers to explore the system by entering texts. Considering the effort that goes into creating computational frameworks for e-lit works, it is a great idea to open them up for further writerly interventions. It is therefore worthwhile to see what four talented writers have done and how their own poetics and thematic concerns are expressed through this framework. The main observable variables are font and lines of text, which readers access in different portions and sequences.

It is worth noting that all five poets (including Lewis) engage the theme of speech, structuring their lines to allow readers to intuit their structure. They help map out the framework’s rhetorical potential.

This generative work produces narratives about a mythical sea voyage undertaken by two characters, an owl and a girl. Framed over the gorgeous image an old sea map, each iteration of the story unfolds in a text that lasts 40 seconds before being generated anew, which is sufficient time for most readers to get to the end, but without being distracted by links. Readers that follow links to the shifting islands found in Wikipedia to get information about some of the story’s contexts are likely to return to a different story, in which the information gleaned may no longer be relevant. This disorientation resonates with the owl and girl’s journey, who aided by various navigational and communication technologies, travel beyond the edges of the known, leaving behind some incomplete records of their adventure.

As you read the stories— and I recommend reading multiple iterations to better appreciate its variations on the theme— keep an eye out for some of the textual undercurrents that slowly begin to manifest themselves in different parts of the map. A peek at the source code (right click on a non-image part of the screen and select view source) starting on line 129, reveals a series of five marquees (named “bay,” “rip,” “journal,” “wecoast,” and “morse”) each of which slowly reveals a poetic text, one line at a time. The only one without line breaks is the last one, displayed on the screen almost as the undulations of waves at sea, is actually a written in morse code:

I will not translate the encoded coda for this work, but you can copy and paste the sequence into a decoder, which will allow you to listen to it and read it in English. Its message leads to reflection upon the work as a whole that may lead to further exploration of its narrative geography.

She spins a sturdy yarn from these fibers.

This generative poem focuses on the dynamics of electronic communication, primarily analog wired and wireless technologies, such as telegraph, radio, and cassette tapes. There is abundant noise in these types of communication— static, crossed transmissions, echoes, and ghost signals— and for effective transmission to occur, both sender and receiver need to be proficient listeners. This is an apt metaphor for this poem, in which one can perceive there is a different signal to noise ratio from what we expect in print texts. In other words, some of the lines may not make sense, but others are crystal clear. Which lines are the carriers of Carpenter’s message?

This poem takes an everyday activity, eating, and places in a generative engine that drives it into excess and absurdity. As the lines of this poem unfold, like rapidly served courses in an endless meal, one becomes increasingly aware of the bodily activities involved with ingestion, digestion, emesis, and egestion— frames of reference evoked by Carpenter’s chosen images and words.

This poem’s paradoxical title is a key to understanding its design and strategies. The subject’s presence and absence from a location is made possible through the passage of time, as the speakers search and imagine his whereabouts. The generated lines are structured to form a dialogue: a call and response that builds and recedes in length and intensity, like tides on the waters depicted in the map. A third or fourth voice (perhaps from the missing one) scrolls in from the background, becoming legible when it reaches enough contrast in the image. The scheduling of texts in this poem enhance the uncertainty of attempting to locate a moving target by keeping readers constantly reassessing what they’re reading.

The gorgeous map provides a sense of place while inviting readers to explore its surfaces.

This poem is about displacement— a fish out of water story about a young woman named Lynne whose imposed migratory patterns are the opposite of what most people choose follow. Lynne’s adventures in New York City all draw attention to people, animals, and things displaced in time and place, the result of immigration, population shifts, fishing, and family visits.

This autobiographical narrative poem is mapped onto a Google satellite image of the Mile End neighborhood in Montreal, where J. R. Carpenter lived for 11 years. This lends the poem a sense of reality but from a physical distance, perhaps analogous to the speaker’s temporal distance from the neighborhood. And much like those satellite images are composed of multiple photographs taken at different times and combined to provide a clearer picture, this work has several writers, lending their voices in English and French as multiple perspectives on Mile End. The main voice belongs to Carpenter, whose previous work “Entre Ville” brought textures to life in this neighborhood.