This “reactive” (a.k.a. responsive or interactive) poem does an admirable job of representing the haiku in digital media, much like “Basho’s Frogger” by Neil Hennessy. Built upon a looping image of a drawing of a tree changing through the seasons, while a stick figure walks across the screen representing its shifting mood through body language. As the reader moves the pointer on the screen, different words emerge, allowing for the discovery of different phrases, depending upon one’s mouse movements. Juxtaposition of images and a connection to nature along with the speaker’s “posture” towards the material are all represented in this brief poem.

Read more“Free Haiku!” by The Dada Sprockets and Ingrid Ankerson

This is a heart-wrenching poem that radically recontextualizes Rengetsu’s Tanka (short poems) by juxtaposing it with sounds and voices from the September 11, 2001 attacks. The poem’s title animation presents the letters in the title descending and coalescing into words that reflect on a suggested surface below, using a background of soft night colors, the moon, and night sounds. Three things subvert the serene initial scene: the night sky contains a jet’s vapor trails, and for a few seconds, a highly transparent image of the burning Twin Towers fades in and out right before the date 09.11.01 appears.

This juxtaposition and superposition in time and space of images, sounds, and words is the main strategy for constructing a powerful mix of frames of reference, separated by gulfs of time, place, and human experience.

This delicately layered poem builds upon the Persephone myth (briefly told at the beginning of the poem) to reflect on the universal experience of losing a daughter to adulthood and marriage. The visual image in the poem seems to be from a Demeter-like perspective as she sees the faded memory of her little girl, with muted colors and seemingly underwater. The poem progresses by gently directing readers to move the pointers over certain parts of the image, which triggers brief sound and textual sequences that explore the speaker’s state of mind. We also get layers of other images fading in and out, of a grown young woman and a bare field, both of which allude to the myth. This is a powerfully archetypal poem, using the technology to evoke a moment that should resonate with parents of grown children everywhere. 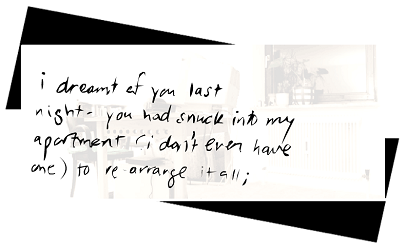 This whimsical poem invokes one of the masters of idiosyncratic poetry, E. E. Cummings. Cummings used capitalization, spacing, punctuation, letters, and words in very unconventional ways to craft off-the-beaten-path poetic experiences. The speaker’s dream taps into this idea, by having e.e. rearrange the furniture in counter-intuitive ways. A simple interface for navigation from side to side presents different items of furniture, which reveal texts and brief animations towards new images when the reader places the pointer over them. Perhaps this is a metaphor for Cummings’ poetics, who rearranged letters and words to lead to new perceptions of ordinary things. See r-p-o-p-h-e-s-s-a-g-r for a fun example of this, and another e-poem inspired by Cummings, “The Sweet Old Etcetera” by Allison Clifford.

This poem plays like a short video in which each line is fades in and out of the window, moving or remaining static, with or without the company of another line. The speaker is a young adult who is faced with a vivid image of the reality of being independent— a sink full of dirty dishes— which triggers a memory of learning to swim in Lake Michigan with her mother. Swimming becomes a metaphor for independent adult life in a poem which explores its parallels in revealing ways for both the speaker and her mother. The minimalist video background and music create an important sense of progression that sets the tone for a powerful final line in the poem that should send you right back to replaying the video poem to decide what happens at the end. Does she sink or swim?

Like the advice given by the speaker’s father, this kinetic and aural poem is all about “presentation and perfect arrangement.” It is about knowing where to cut visual and aural language, images and sound clips, arranging them on the poem’s space to make an impression. Yet while the speaker seems to be learning what her father has to say, one can sense the tension in her as she conforms to a vision of how one presents oneself and in what contexts. The masculinity of the images juxtaposed with the words “a firm handshake, after church” contrast with the more feminine figure we see leaning by the stove or hunched in silhouette. Listen to this poem and you’ll realize that it hovers in that space between tradition and innovation, expressive orality and through new media, conformity and rebellion, and different types of distance and proximity.

What happens when you change a poem’s medium and context? Is it still the same poem? Ingrid Ankerson’s re-production of Raleigh’s poem suggests that it is not.

This collaborative poem combines the Steve Matanle’s words and voice with Ingrid Ankerson’s music and design to produce a well integrated multimedia performance. The poem plays like a short film, requiring no interaction from the readers but commanding aural and visual attention with engaging music, a richly textured vocal performance, and visuals that enhance the experience of the poem. Some lines in the poem are punctuated by the appearance of text, brief animation sequences, and graphical information that enriches the imagery evoked in the spoken words. Timing is all in this brief poem which synchronizes its visuals with the music and rhythms of Matanle’s voice to tell a story of a forbidden love affair that is hurtling towards a destination as inevitable as the train tracks laid across the poem’s visual field.

The simple yet unexplained interface for this sexy Flash poem is a metaphor for the subject of the poem—kids who barely know how to drive (or interact romantically) cruising in a small town in Wisconsin— because the reader is also a novice on how to read and navigate this poem.

The guitar music and clear voice delivering the aural version of the poem, presented simultaneously with the visual text the reader must learn to traverse in order to read, and the pictures of cars, streets, and neon signs combine well to deliver an immersive, and very hip, experience.

Featured in The Electronic Literature Collection, Volume 1, Poems That GO.