This hypertext poem is open by design, with a long history of inviting participation from others. When it was first published in 1993 in HyperCard format by Eastgate systems (referred to in earlier entries as Marble Springs 1.0) it offered readers the ability to contribute their own writing to the work via annotations, as described in the publisher’s site.

Marble Springs joins reading and writing as it invites each reader to rewrite and extend the work. Open or “constructive hypertexts” have long been considered one of the great promises of hypertext fiction and of the colonization of cyberspace, yet actually creating an open hypertext, one in which others can write and will wish to write, poses both technical and artistic challenges which Larsen has met head-on.

This hypertext epic about the lives of the inhabitants of Marble Springs, a fictional gold rush town in Colorado is an ambitious project 25 years in the making. For the past two entries, I have focused on issues of publication, obsolescence, documentation, and representation of her creative vision. This entry will examine a character’s page / lexia / node— Mandy Turner’s—analyzing its design, poetic language, and link structures.

This new version of Marble Springs, originally published in Hypercard in 1993 by Eastgate Systems (see yesterday’s entry for details), uses a contemporary authoring system that still can’t quite achieve Larsen’s vision for the work. Here’s Deena’s commentary in the “About Marble Springs” page, which also offers a detailed version history for the work:

This hypertext narrative poem was written in HyperCard and published by Eastgate Systems in 1993. Using multiple interfaces and links, it tells the interconnected stories of the inhabitants of this small town in Colorado opening spaces for the readers to weave in their own narratives into the work. Its free verse lines use unadorned diction, paying careful attention to the impact of line breaks and varying line lengths in delivering a story.

This collaborative hypertext poem uses a “page space” designed by Zellen to create a sequence of pop-up windows that last 20 seconds before closing along with links that lead to new pop-up windows, simultaneously closing the previous one, and leading to a final page with three thin vertical frames. This produces a powerful sense of progression in which the reader must press on or have to start over while not providing any way to get back to an earlier page. Larsen uses this structure to build a trail of consciousness which includes the thoughts of a character seeking a path and sense of purpose in a world that seems to have the former, but not the latter.

This multimedia poem was written by Jody Zellen, using a “page space” developed by Deena Larsen for this collaboration. Each of the question marks responds to a mouseover by triggering a line of verse moving diagonally across the poem’s surface along with a sound. The title’s reference to the flesh and the use of heartbeat, sonogram, and voice recordings saying things like “breathe” all reinforce a surgical conceptual framework, and metaphorically framing the diagonal language movement as cuts, slashing across the screen. The occasional variations in the sounds and word movement place the poem in conversation with some of the urban concerns which are so central to Zellen’s poetics, while the literalization of a metaphor through interface design is part of Larsen’s. 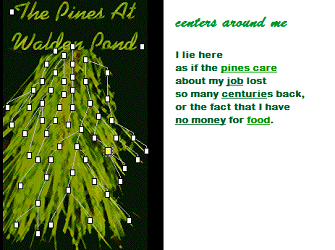 Open “The Pines at Walden Pond” by Deena Larsen

This lyric hypertext poem is based on a speaker’s thoughts and observations centered upon the pines at Walden Pond, a space celebrated in American literature thanks to Henry David Thoreau’s book Walden, his experiment in self-reliance and Transcendental song.

Larsen’s hypertext is mapped upon an image of a pine branch, in which several nodes are connected by spindly linear trails. Each trail of links can be interpreted as a line of thought, starting with four nodes that focus on the pines, the speaker’s perception of them, Thoreau, and the speaker herself. Following the link trails lead to nodes that hold together well, though there are both physical and conceptual branchings. Clicking on links as they appear within each text also creates thematic associations. Both ways navigating this poem lead to a powerfully associative coherence in a piece that engages the beauty of the place while questioning some of Thoreau’s politics.

With its six 5-line stanzas that can be selected line by line, this combinatorial poem uses a similar structure to Raymond Queneau’s “Cent mille milliards de poèmes” and Jim Andrews’ “Stir Fry Texts.” Larsen describes this as “a true hypertext in that it cannot be read linearly” yet she provides a mechanism to progress linearly through the stanzas and even provides a coda after reading the sixth stanza. Moreover, the background images change only when the “linear” reading link is selected, so even if one clicks on each line once to get to the original second stanza, that important contextual layer of context is lost. Reading the poem linearly does offer a lyrical narrative very much in the Romantic tradition, with a speaker going out into nature and having an aesthetic and philosophical experience. 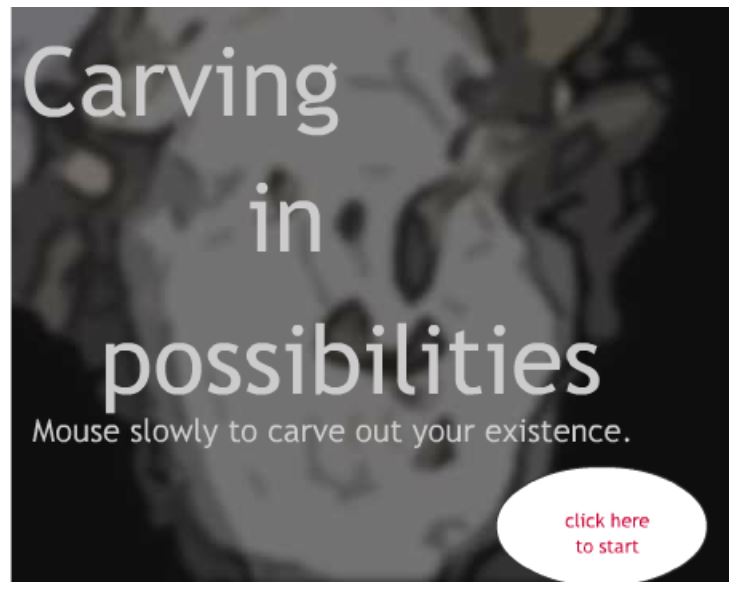 In this short piece, Larsen displays a blurred image of the face of Michelangelo’s David and overlays it with invisible hotspots triggered by the pointer, displaying color coded texts from different speakers, making a sharp “carving” sound, and sharpening the focus of the image gradually over the course of 40 triggers. This approach allows readers to “carve out” different textual combinations and readings of the poem— a fitting example of Larsen’s interest in metaphorical interfaces for her works.

Read more“Carving in Possibilities” by Deena Larsen, with sounds from Matt Hansen