This series of 41 entries on E-poetry in social media has focused on works that engage digital and social media’s affordances and constraints to produce works that push the boundaries of what is possible in print. For that reason, this blog isn’t particularly interested in traditional poetry published via online networks, as good as it might be, with one exception: Alan Sondheim. A prolific writer, musician, and artist, he takes on the “social” in social media to heart, building a writing and publication practice that is truly native to this emerging publication and artistic environment. 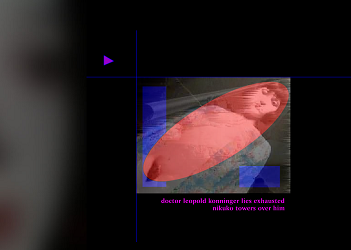 It seems like Sondheim and Smylie seek to keep the work tasteful and artistic through abstraction, design, scheduling of the presentation, and poetic language. Do they succeed in achieving a careful balance between shock and aesthetics?

With this brief piece, Strasser and Sonheim show us that the path to great multimedia poetry lies in simplicity. The way they’ve chosen to juxtapose the two short films and provide an interface that allows us to change their angle. Because the videos are of the view from a moving car, those positions can combine to change directions, produce a sense of openness, or drive towards a vanishing point. Its music, pacing, and brevity are evocative of the haiku, while the jagged graphic that rotates in the films suggest explosive violence. That combined with the year of publication (2004) and the use of the word Baghdad, makes for a powerful statement on the Iraq war.

“cursed be the god that brings so much death and beauty.”

This wistful poem dwells on that liminal space between night and day, life and death, joy and sorrow. The pace at which images and words appear and fade are also right on the edge of slow, encouraging meditation, and almost too fast to grasp upon a first reading. The images, smoothly blending from one to the next, all contain thresholds in the shape of fences, coasts, rivers, further reinforcing the borders between the worlds contemplated in this poem.

Sondheim provides the words, sounds, and images while Strasser composes the piece in Flash in a successful collaboration that demonstrates that the sum is greater than its parts. 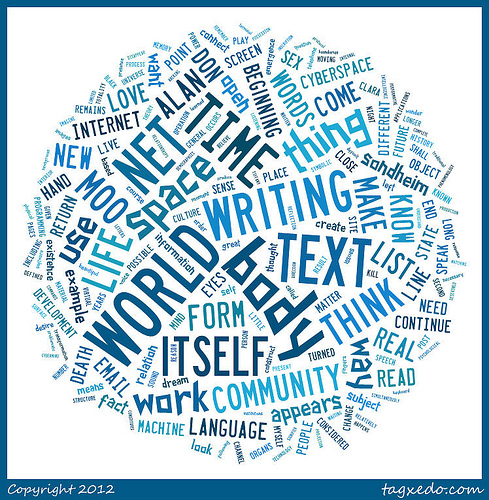 Alan Sondheim is a prolific writer, musician, and artist who uses the Internet as an inspiration and means for publication. The sheer mass of text he has produced in the past 15+ years is so staggering that it reminds me of Basil Bunting’s “On the Flyleaf of Pound’s Cantos.” To be specific, here are some numbers compiled after cutting and pasting all the text in the files which constitute this portion of Sondheim’s Internet Text: