Created in the wake of a mass shooting event in Isla Vista, California, this bot takes aim at the National Rifle Association and the rhetorical strategies it uses to protect the industry and gun culture it lobbies for. He accompanied it with a manifesto titled “A protest bot is a bot so specific you can’t … Read more

This short article written by the staff writers of the satirical newspaper The Onion, was published in response to a mass shooting in Roseburg, Oregon on October 1, 2015. Published on the same day of the event, the brief article appears in the News in Brief portion of the online newspaper, by itself an ironic … Read more

On 2 June, at the annual Apple Worldwide Developer’s Conference, Apple CEO Tim Cook announced Swift, a new programming language created for the development of Apple software. The new language brought with it a new filetype—the .swift file—which itself came with a new icon. As with all things Apple, the Swift icon was quickly dissected, … Read more

My death draws near. And David Cole’s Twitter bot “@Robotuaries” is responsible. Okay, partly responsible. This bot’s behavior is summed up by its description “randomly generating the deaths of anyone who follows this account.” So by following the account, I authorized it to generate a fake obituary and publish it in Twitter. Fair enough. But … Read more 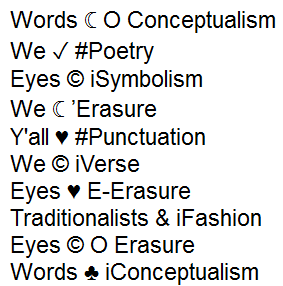 Open “I Heart E-Poetry” by Nick Montfort This occasional poem celebrates the presentation of “I ♥ E-Poetry: 500 Entries Later” at E-Poetry 2013 on June 19, 2013. Based on Montfort’s own “Taroko Gorge” source code, this stripped down version generates lines inspired by the title of this blog (“I ♥ E-Poetry”) using four variables: a … Read more

The bot is an e-lit genre that goes as far back as 1966 with Joseph Weizenbaum’s ELIZA, a chatterbot that engaged users in conversation through text entered and displayed in a computer terminal. This concept informed interactive fiction from the 1980s and has breathed life into video game characters ever since. Poetically, bots are also … Read more

This bot is a stand-in for Kazemi at the Game Developer’s Conference happening at the time of this posting in San Francisco, because he will not be able to attend for the first time in 10 years. So instead of pining away on Twitter as #GDC tweets flood his stream, he created a bot so … Read more

This is part 4 of a series of 5 postings on poems generated by the “Frequency” program. For an overview of the series, read the first entry. This entire project was inspired by the OULIPO, and how they created new poetic and literary forms based on mathematical and other constraints. Not only did they create … Read more

The “Frequency” project is an investigation into Oulipian constraint-based writing in several levels: A linguistically determined lexicon of the 200 most frequently used words in the English language— an endeavor that is already built upon the constraint of the corpus that analysis is based upon: Oxford Online and Google have both famously made such analyses, with … Read more