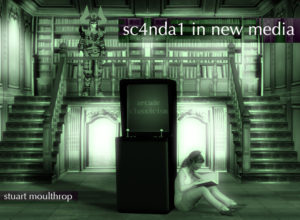 Every time you beat a level, you are rewarded with a new transient text filled with inside jokes, references to the history of electronic literature, and insightful reflections on the nature of remediation. But as you wonder with delight around such concepts as the “irremediable” and the “remediand”, or try to grasp a striking comparison between the UTM (Universal Turing Machine) and an ATM, the transient text slowly disintegrates into a soon illegible string of numbers, as if under the attack of a playful virus, in a manner reminiscent of John Cayley’s “Translation“.

“sc4da1 in new media” remediates the aporia/epiphany dynamics of electronic literature into the fail/win dynamics of video games to produce a unique commentary on the delights and mysteries of computing. “sc4da1 in new media” brilliantly unveils the scandalous truth of play: it was always about losing. I dare you to make it to the last level and unveil the true anagrammatic meaning of GAME OVER.