The poem’s interface is presented as a grid with nine cells containing nine distorted images of some printed text. When the interactor rolls the mouse over the images, a short animation loop and a voiceover soundtrack are activated playing the verse printed on each image. The verses are set following an initial order, but the interactor may organize new possibilities of reading according to his will.

From among its many possibilities, I propose the following  reading order for this poem: 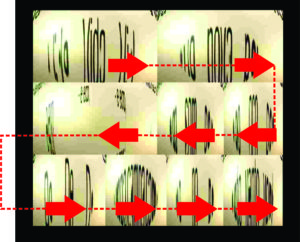 The presence of the word “echo” is an important aspect in the composition of “Memory”. In Greek mythology, the nymph Echo wore her powerful verbal eloquence to distract Hera while Zeus was amused by other nymphs. Upon discovering the treachery, Hera punished Echo causing your eloquent speech was reduced to mere repetition of another person’s words. Since then, the myth of Echo became a metaphor for the hidden voices of nature, the lament of unpronounceable speeches impossible to be expressed and recorded only in memory.

The intermittent repetition in “Memory” digital poem is an allusion to Echo. However, it is up to the reader to decide to stay imprisoned in the reverberations of sound verses or uncover the poetic paths through personal arrangements from the elements available. Regardless of the path chosen by the reader, the poem will always lead to new discoveries and new sensations.