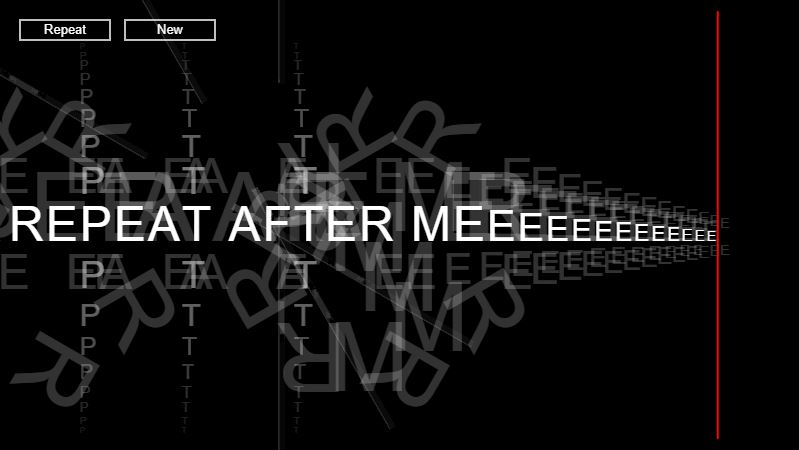 This is a poem without a text. What Piringer has created is a responsive environment for readers to type their own texts and experience them transformed visually and aurally by the mechanisms he has programmed. As you type each letter, you will be presented with the letter surrounded by an artistic arrangement composed from the letter and a recording of Piringer articulating a sound, which in most cases corresponds with the sound one would associate with that letter.

As in his other works, particularly “abcdefghijklmnopqrstuvwxyz,” he extends the Lettriste tradition by changing the alphabet’s visual and aural values, adding time-based behavior, and changing our relation to it. For example, playing back the text from the screen-captured image above results in an unfamiliar rendering of language, but not a particularly interesting one. This is not surprising: conventional uses of language in an unconventional environment produces strangeness but rarely beauty. Some imaginative play is necessary in order to enter a productive conversation with it and appreciate its vision.

The example below is the result of some fooling around with the keyboard, which led to the realization of a surprising behavior: when a letter is typed repeatedly, it shrinks in size, along with its visual trace. Another intriguing discovery is that when you play back the text (by clicking “repeat”), it does so at the same speed you typed it in, which means that it records your text in time and space. This lends itself for arrangements of letters to produce visual and musical effects, so after a little creative play, I am happy to present a piece titled “QWERTY.” Enjoy!

So can we have a poem without a text? Yes and no. Piringer has written and composed a poem consisting of all the letters of the English alphabet in a way that carries his voice, vision, and poetics. He just hasn’t arranged them— and that’s where we come in. By leaving it to us, he is leading us to reflect on how our own relation to letters is so ruled by convention that we gladly follow how others have organized them for us: authorially, alphabetically, ergonomically (hence “QWERTY”), spatially, linguistically, culturally, and timelessly.