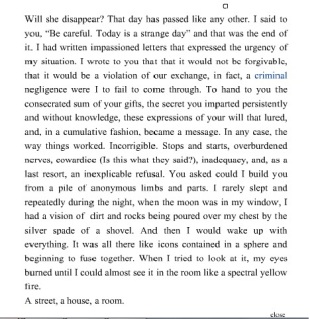 The Jew’s Daughter attempts this historical simultaneity in multiple ways, though perhaps most overtly by presenting the entirety of the text without replacing the page itself. That is, instead of clicking through various pages as one conventionally would in a hypertext, hovering the cursor over highlighted portions of the text changes sections of the printed page. This gives rise to a page that itself forms a new narrative while working within the structure of the previous description, combining past and present to reconfigure the page’s narrative composition. The reading proceeds fluidly, not working by clicks and jumps to new pages, but seemingly more organically by exchanges on the same page. To borrow from the novel’s own repeated water-imagery, the page echoes a shore which is constantly being re-inscribed even as it maintains a certain amount of seeming permanence. 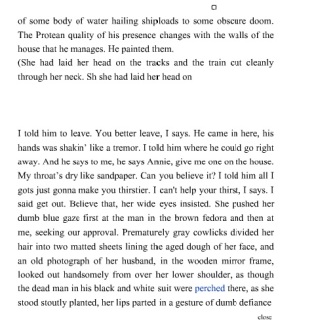 At times, a section of the text appears to be typed in to fill the space that has been opened during the reading, playfully indicating a self-reflexive awareness of hypertext’s relation to theories of the performativity of language. Indeed, the text includes a note from J. Austin, the hired hand of the primary narrator’s landlady, which has at least two grammatical errors and misspellings; perhaps indicating a perverse tongue-in-cheek reference to linguist J. L. Austin whose work is so frequently cited in critical writing on hypertexts. The text’s mixture of prose and poetry, its allusions to historical and mythical figures, as well as the manner in which it produces itself on the page, all play a part in destabilizing the reading.  The reader has to choose what to focus on – the new narrative that is being formed and its role in the hypertext novel as a whole, the manner of interaction of the new fragments within the old, or the potential significance of the pattern of the highlighted words that leads to the changing pattern of the text. The best advice comes from the novel itself, “patient, cautious receptivity was what was needed.”