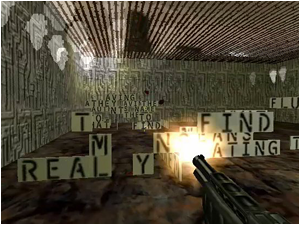 What would you do if you were trapped in a room with large floating lines of poetry, a crowbar, a shotgun, and grenades? There is nothing else to do but to start attacking the text, whether tactically modifying the language by destroying certain words or cutting loose and blasting them all away. To play this poem, you’ll need the first-person shooter Half Life installed in this computer and follow the instructions to install this mod. If you don’t want to install the game (currently a cheap download), you can watch the video which documents a session of the game— but watching someone else play is never as satisfying as doing it yourself. The real treat is Baldwin’s essay about the poem, “The Nihilanth: Immersivity in a First-Person Gaming Mod,” which is effective both as critical writing and as what has been aptly described as Sandy Baldwin’s “word-jazz.”