Note: This poem was revised, renamed, and republished as “Sydney’s Siberia” in Heliozoa.com.

Jason Nelson’s talent for creating idiosyncratic interfaces to shape his works is evident in this image-driven hypertext poem. The red box allows you to select a portion of the image and zoom in to reveal a pixellated version of the selection that looks like a mosaic (see below).

Zooming closer reveals that those odd pixels aren’t pixels, but tiny images arranged like tiles by their predominant colors to evoke the needed pixel color (see below). 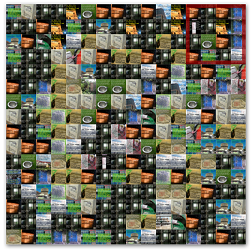 Zoom again to realize that each image/tile is similar in structure to the fullscreen images one begins with: a composition consisting of an image, a poetic text, and usually some hand-drawn that help direct attention to or comment on features of the photo (see below).

Selecting an image from the 4×4 grid above will lead to a fullscreen node in which one can appreciate the details of each nuanced tile. And one can continue zooming in and exploring what is obviously a large body of work consisting of over 200 tiles.

There is much to discover in this work, infused with Nelson’s personality, wit, and keen eye for detail. If you wish to wrap your brain around this work, my suggestion is to explore as many tiles as you can, and try not to think of this as a combinatorial work that you’re assembling to form some sort of a sequence. That line of thinking leads to mathematically-induced madness as the realization that you’ve set yourself an impossible task for a human being to achieve. Instead, I recommend you read, make free associations, intuit color and thematic relations, and then step back from the work. As suggested by this poem’s interface, you can’t see the big picture if you’re too focused on the details.