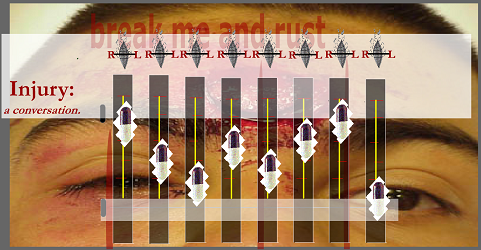 This suite of three sound poems (or three-part poem) were inspired by Glenn Gould and his experiments with musique concrète (for a fun example, see this video). Nelson uses audio recordings of interviews on three topics— injuries, products, and robots— and places them on an interface that allows you to mix 8 clips at different volume levels and audio panning (sending signal to the left or right speakers). This can be used to listen to a single voice or place multiple voices in conversation, adjusting their virtual proximity (volume) and relative position in order to construct a sense of space in which people discuss a topic. Each interface is visually and thematically designed with a different background images, slider knobs, and an animated morphed image. The image above is from “Injury Analysis” and the following two are from “Product Sermon” and “Robot Party.”

Jason Nelson’s incisive wit carries through this poem by selecting audio clips that reveal some very human (and Midwestern) concerns and attitudes toward personal injury, different kinds of products, and robots. These often humorous, occasionally outrageous, and always insightful responses to Nelson’s interview (whom you can occasionally listen to asking questions or prompting responses) are interesting on their own, but also when placed in conversation with each other because it foregrounds the natural rhythms of Midwestern English.

The tripartite structure of this poem (or suite of poems) is significant in how it prompts the speakers to reflect upon the Self (via their bodies in “Injury Analysis”), their revealing projection of an Other (in “Robot Party”), and the connection between their bodies and the corporate world (through “Product Sermon”). Nelson’s interface, clip selection, and transformations of these voices— there is always a voice that has been transformed through audio filters— directs our attention towards these topics and people in an absurdly insightful way.