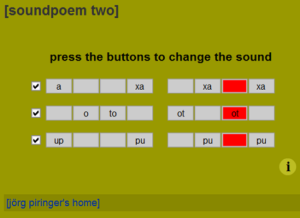 These two responsive sound poems provide intuitive tools for readers / listeners / composers to explore the minimalist sound lexicon Piringer has created for them. The lexicon consists of syllables turned into icons or tokens that the reader can move and place (or toggle) in the interfaces to activate brief recorded vocalizations associated with them and combine them with other syllables to create musical & poetic compositions.

“Soundpoem one” provides four spaces to place icons, each of which corresponds to a different left-right audio signal distribution. Each icon produces a rapidly looped sound, but when placed with others in the same space, they play sequentially before looping. The addition of a silence space is important because it allows for the creation of different rhythms, and it allows us to better appreciate the syllables. Placement of icons in different spaces creates a sense of place with multiple voices, which can set up conversations, echoes, call and response, choruses, and so on.

“Soundpoem two” is a sound sequencer and mixer, which allows the reader to toggle syllables in different positions. The sound choices for each line show an interest in deconstructing a syllable from an articulatory phonetics perspective, inverting and taking apart its sounds and even providing a voiced counterpoint to the voiceless consonant in each line “xa” (“gsa”), “to” (“do”), and “pu” (“bu”). To be slightly more technical, he’s playing with minimal pairs of identical consonants, with the only difference being that the vocal cords are vibrating: note the difference between /k/ & /g/, /t/ & /d/, and /p/ & /b/.

These are important early works from the creator of wondrous sound poems for the computer and iOS machines. Click on his name on the tags below to access more of his work.