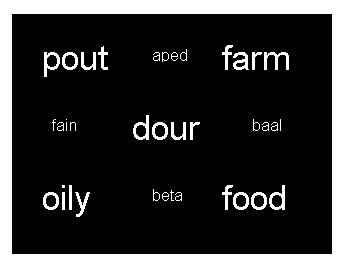 This combinatorial poem uses random words arranged on a grid changing in seemingly random at different time intervals. The word in the center of the grid distinguishes itself, not only by position, but by its slight overlap with the word that is to replace it. This film technique known as a dissolve adds a layer of depth to the transition by having a 10th word juxtaposed (superposed, really) and by visually representing the time-based mechanism in the poem. The title plays with a double meaning: words that are culturally considered obscene or insulting, and with a constraint of using words with only four letters (see this Scrabble dictionary). Knoebel seems to be foregrounding the latter, thought initially the title points towards the former meaning.

Part of the fun in reading this piece is to consider the combinations the words form as you read in different directions in the grid. Sometimes the skeleton of a sentence emerges. Sometimes surprising combinations emerge. To what extent are the word choices random and we construct any semblance of meaning? And how do we read font size and how frequently the words change?