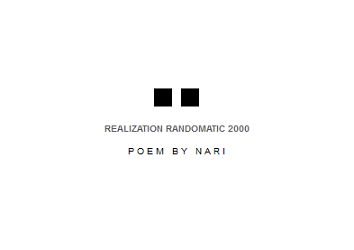 The minimalist interface for this piece presents two links, one in each black square, that lead to a “Poem by Nari.” Self-described as “visual poems from the cyberstream,” these conceptual poems are inspired by the Web— its aesthetics, code, images, and texts, both intended and accidental— and reworked by Warnell to comment, highlight, and transform it into e-poetic works that are difficult to classify in any conventional genre or art form, except as net.art, which is far from traditional. Returning to this piece (or reloading the page) shows different works in the window, keeping the experience fresh while frustrating attempts at re-reading the works by providing uncertain access to them.

A common feature of these works is the use of HTML and JavaScript codes to radically format text into shapes that challenge legibility, moving them into the realm of visual and computer art. To be able to read them effectively, it helps to read them as digital objects: their conceptually insightful titles are displayed on the browser’s chrome, as are the names of the HTML files. Reading the source code is also a productive strategy, even if you aren’t fluent in these markup and scripting languages.

For example, reading the source code for this work helps to understand Warnell’s goals. Warning: looking at the code does spoil some of the surprise element and makes previously unreadable texts readable. There is pleasure in this code, where we can see Warnell express himself in another manifestation of his poetic voice. This being said, I will take a look at the HTML file for “Realization Randomatic 2000” and see what may be gleaned about this enigmatic work.

This piece is an interface for users to randomly access 2 out of 16 “Realization” poem[s] by Nari. The source code offers a complete list:

Because the paired poems are selected randomly, we may interpret two possible intentions for the structure:

Does this piece lead readers to speculative readings of randomly juxtaposed poems, rewarding them with new combinations of poems that lead to new potential readings? Or does it subvert attempts to reduce the poems through single interpretations since the interface’s random combinatorial design produces 2^16 (65,536) possible combinations?

Your attitude and approach towards this kind of conceptual poetry may determine whether you find your insights rewarded or subverted.