Take it (2013) is a digital videopoem created by the Brazilian digital poet Wilton Azevedo. Conceived originally in English, this videopoem consists of video images that intertwine the verses constantly moving across frame according to the soundtrack frequency through an interface with a Processing script.

Read more“Take it” by Wilton Azevedo

This Twitter bot generates tweets using two data sets: the text of the MIT Press book 10 PRINT CHR$(205.5+RND(1)); : GOTO 10 and any tweets with the #10print hashtag. The generator uses a Markov chain process to analyze a text and determine the probability of any word following another to generate a new string of words that resembles the original and publishes it on Twitter. Here are some examples:

This narrative hypertext poem creates a web of semantic and spacial associations between short excerpts from interviews of refugees living in London. The ethnographic dimension of this piece lends weight to the work as one realizes that these snippets of text are from people’s life stories. The keywords that float on the screen and pull up narrative fragments can be understood as tags in a database. Some common ones (listed in Mencía’s site) are:

This mutable poem explores how memory can be affected by the passage of time by using a fascinating tool, the RiTa.WordNet library. This collection of words is associated through a variety of semantic and conceptual relations so when Soderman uses it as a data set for word substitution (as he did in “Cloud #1”) it creates a cognitive language trail. The challenge this text poses is that it creates a different substitution every second, effectively creating a textual moving target as it follows different cognitive trails. The ringing bells in the audio track reminds us of the passage of time and as some texts attempt to revert their signifying trail we sense the irony in attempting to reverse time.

This mutable poem explores a simple concept, word substitution, using sophisticated tools. The data set is WordNet, which clusters words conceptually so substitutions are governed by synonymy, metonymy, and semantics which should allow the prose poem to retain some coherence. But does it? Here’s the poem after running for minute or so:

Afeeld is a collection of playable intermedia and concrete art compositions that exist in the space between poetry and videogames.

One cannot do better in defining this collection of whimsically hip works by Liszkiewicz, a 2011 graduate of the M.F.A. in Media Arts Production from SUNY Buffalo (home to the Electronic Poetry Center). I will briefly comment on its different parts, each of which has its own look and feeld:

These works sit right in the middle of graphic art, poetics, and ludology and invite us to come and play.

This work is reminiscent of Jim Andrews’ “Stir Fry Texts” combined with the chance operations evoked by three large dice-shaped cubes, the title “Roulette,” and the raffle-drum look of the word-dice rolling around inside the three large cubes. The words randomly brought up within each cube are highlighted in a textual excerpt that is combined with other text portions beneath. If this all seems a too distracting, interface-wise, then keep the volume on your speakers low or off. Under all that interface, however, there are fragmented narratives and turns of phrase that deserve to be discovered.

This suite of 26 pieces evoke the Lettriste tradition in the digital age, an age in which the letter is freed from its statuesque status in the page to dance with its reader on the screen. Cho’s work is as elegant in its simplicity as the characters on the screen are full of character. Each poem knows where the reader’s pointer is located and responds by moving, stretching, sliding, bending, and much more towards that location. Dance with these letters, and you’ll understand why Philippe Bootz says that the cursor is the reader’s symbolic presence in the text and animation is the author’s… 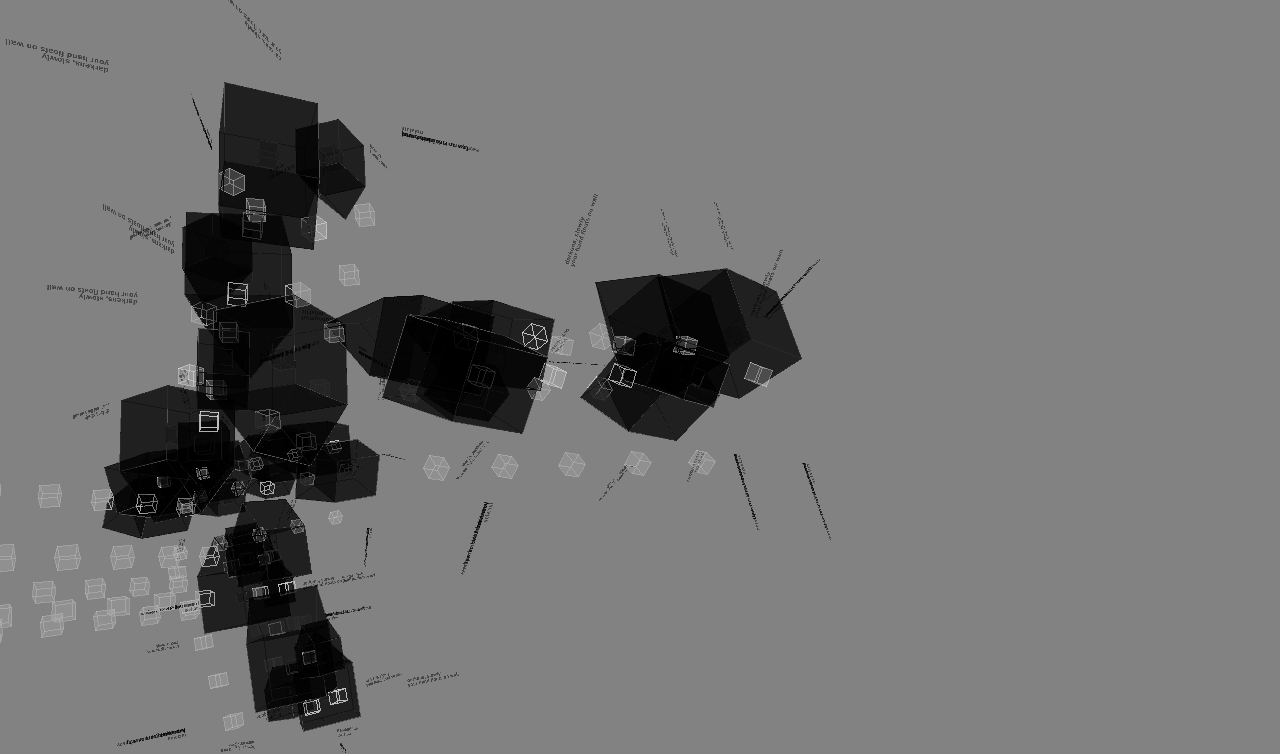 This is a challenging work because its presents a simple, yet imprecise, interface that allows one to explore an ever shifting 3D virtual space. Its boxes change colors and sizes and display texts randomly selected and assembled from four different datasets, triggered by a schedule or by user interaction.