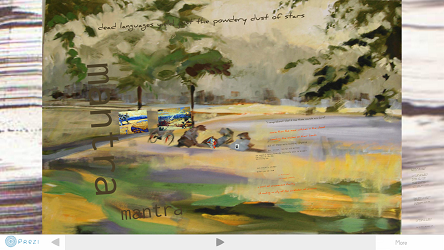 Open “What the Nightwoman Texted” by Mark Marino

This poem is a multimedia mashup of poems by Mary Mackey, Tulip Temple, and Carmen Firan, along with paintings by Amy Bernays brought together on a presentation tool called Prezi. Marino takes advantage of this tool’s capacity for positioning, layering, scaling, and zooming path creation to arrange these visual and textual materials in a way that truly remixes them into a new poetic experience. By juxtaposing texts from disparate sources in different formatting, he places their voices in conversation. At least one of these is already in conversation with T. S. Eliot’s poem “The Love Song of J. Alfred Prufrock.” By arranging them within paintings (with zooming that highlights their brushed materiality) he adds a sense of place to these voices.

A successful mashup leaves its audience feeling like it has experienced something fresh, bursting with original energy as it re-envisions other people’s material. Go full screen with this piece and follow the path Marino has traced through this landscape to discover an act of writing that required very little typing from him but feels like something greater than the sum of its parts.

This poem about a historical event during the winter of 1945 in which German families who lived in Brno were forcibly evacuated and marched 40 miles to the Austrian border, resulting in many deaths. A descendant of survivors from that march, Saemmer’s poem evokes the difficulty of grasping and reconstructing this traumatic portion of family history by writing, positioning, and mapping a way through a spatially arranged text in a presentation software called Prezi.

Prezi is a spatial presentation tool, which allows for placement, scaling, and visual navigation of textual and other objects on an “infinite” canvas. Saemmer uses it to place a textual layer over a video of a march in Winter with thunder-like sounds of war in the background. The arranged texts can be explored as the reader desires, but to really appreciate the craft of this poem, you should place the video on fullscreen and autoplay. The sequence that unfolds makes clever use of the language, recombining lines to distinct effects, and making meaningful use of position (as in the use of the word “here”). After reading the sequence Saemmer has composed, do explore the work by zooming in and out to appreciate details and get a sense of the big picture in this powerfully emotional poem.