Minicontos Coloridos  is a collaborative project conceived by Brazilian journalist, writer and teacher Marcelo Spalding in 2013. The short tales are structurally and conceptually associated with colors in a playful way. To access the stories, the reader should mix the primary RGB colors through a pull down menu available on the website in HTML which hosts the tales interface. The website offers three blending options for each of the three primary colors, totaling 27 short tales.

This hypertext work of poetry, theory, and narrative is exquisitely programmed in HTML 3.2 using JavaScript from 12 years ago, which means that it is currently best read in Internet Explorer, which retains its responsive elements. This DHTML piece uses JavaScript to modify the Document Object Model (DOM), which means that the document is the same, but once you activate certain parts of it, its rendering becomes modified with the addition of static or kinetic elements.

This visually and rhythmically enthralling piece uses a minimalist interface to create a work that resonates in its repetitions. Organized to look both as a visual piece and a code poem, it uses a simple interface to organize the language and produce multiple readings of each part. I recommend reading this poem out loud to feel the rhythm established by all the repetitions of falling in each line, starting with the page as it loads before clicking on any links. Clicking on the words in the first column trigger the display of new parts of the poem on the right hand column, parts that seem to tell stories of relationships, states of being, moods, war, and other human concerns. You may choose to read the whole thing linearly and intuit a narrative from the sequence, or you may read it texturally, occasionally including a “falling” from the central column for the sake of increasing the echoing quality of the piece and adding a layer of wordplay.

When Jim Andrews published these poems in Cauldron& Net, Volume 1 in 1999, their original DHTML and JavaScript codes were compatible with the two main Web browsers of their time: Netscape Navigator 4 and Internet Explorer 4 (IE). This was during the peak of what is known as the “first browser war” in which IE became the dominant browser in the market. At the time, each browser was implementing code differently, creating code incompatibilities that led to the practice of detecting browsers to redirect readers to different versions of the document, or determining what part of the code was executed in a specific session. Some writers opted to pick a browser and directed readers to view the work on that one, while others sought cross-browser compatibility.

This is a generative poem you can visit for years and continue to find things to surprise and delight. It is structured around a text— aptly named as “a strand” (as in a fiber or rope made of letters or characters)— which is shaped by “aspects,” which are programmed structures that shape and transform the strands through color, animation, scheduling, formatting, and other transformations possible in DHTML. Considering there are 10 “strands” (plus a “user-fed strand”) each of which can be shaped by 36 different “aspects,” each of which can have multiple controls and toggles, you don’t have to do the math to realize that this is a work of staggering generative possibilities. Combined with a few randomization and combinatorial touches, this is a work that will always welcome you with fresh moments, inviting you to play with its structures.

This is the first poem I read by Jim Andrews and it is still a favorite because of its elegance, economy, and naughtiness. It is also Andrews’ first DHTML poem, written in the early days of the Web (1997), and marking a shift in his practice from visual poetry to a poetry in which he yields some of his control over the text to his readers. This poem, along with “Enigma n” and the “Stir Fry Texts” punctuate a vibrant period in his development as a Web artist in which he started to imbue his texts with behavior: responsiveness to carefully defined user input, motion triggered and controlled by interactivity, controlled randomness, and looped or open ended scheduling of the experience. 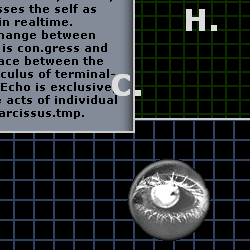 This celebrated work of e-literature is not only hard to label— poetry, fiction, theory, essay, English, code— it is also hard to read. This is not a criticism of the text: it is merely an observation on its ontological reality.

When Memmott wrote it in 2000, DHTML was a new thing, without established standards, and a key player in the browser wars. Aware of the difficulties in maintaining compatibility over time, he engaged its obsolescence thematically in the work. Nowadays, DHTML has come a long way towards becoming a new open standard, but the code in “Lexia to Perplexia” barely functions in modern browsers.

What can an interested reader do to experience more than the tip of the iceberg that is still functional in this text?

With this series of collaborative e-poems, Andrews uses the cut up, an important technique in his poetics that aligns him with the work of William Burroughs, Bryon Gysin, Raymond Queneau, and Surrealism. His ingredients include e-mails, quotes, concrete poetry, and essay like writing, lovingly sliced with DHTML programming tools. Jim Andrews and his collaborators prep the texts for stir frying, cutting and linking where they see fit. The computer provides the energy to run the scripts and heat up the surface on which the texts are displayed. The reader’s hand, by way of the mouse and its virtual pointer on the screen’s surface, stirs the texts, cooking them up into new combinations and possibilities for his/her consumption.