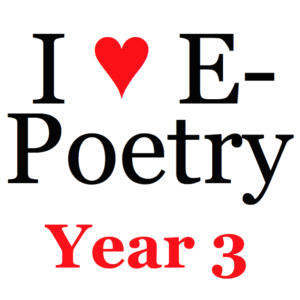 As the third year of the I ♥ E-Poetry project draws to a close, I’d like to offer some numerical data, reports on our activities, future plans, and acknowledgements– a tradition I started last year. This reader-friendly report should have special appeal to those who would like to know more about the community of readers they belong to and how the project is developing. Welcome to this guide focused on a key component in the Electronic Literature Showcase starting today at the Library of Congress. (Read Susan Garfinkel’s post at The Signal for more details on the event.) The exhibition, curated by Dene Grigar and Kathi Inman Berens, is the heart of the Showcase, crafting enlightening experiences for visitors familiar and new to electronic literature.

They have also created a website for the Exhibit, so those who cannot physically attend can benefit from experiencing the works as curated. Their curatorial statements are worth exploring to understand some of their rationale behind their choices. They have also done an wonderful job of contextualizing each work, so I recommend exploring these resources directly on their site.

To mirror the logic of the exhibit, I have taken the list of electronic literature stations from the “Featured Works” page and linked the titles to all the entries. All the entries directly linked to from the exhibition have been tagged to aid in future searches and exploration.

The works without links haven’t been reviewed for one of two main reasons:

Readings & Performances at the Showcase:

This is a historic event, in which a literature beyond the book comes to the house the book built.

On the occasion of the Electronic Literature Organization 2012 conference— a biennial event that brings together some of the best scholars and artists in the field— curator Dene Grigar and co-curator (and conference chair) Sandy Baldwin put together a Media Arts Show worthy of the attention of the e-lit community and the rest of the world.

Having completed reading all the e-poetry in the ELC2, a little reflection is in order. Launched a little over a year ago, this collection has proven to contain some highly engaging work in a surprising number of platforms and authoring software. I was delighted to discover works in Second Life and Half Life both immersive social/gaming environments that provide the ability to create and give shape to spaces with writerly tools. Also surprising, yet disappointing was having to see movies documenting work in environments I didn’t have access to. I felt that the limited space of the anthology could’ve been better used by incorporating works we could really experience. Still, I understand the impulse to document the existence of works that may not be online or in a platform that cannot be published online, such as works designed for the CAVE.

The poetry in this collection was quite moving, with interfaces that went from minimalist to highly sophisticated. In comparison to the works in the Electronic Literature Collection, Vol. 1 the design seemed cleaner, more transparent, better integrated to the poems. Is this an indicator that e-poetry is becoming less “interesting” and more “good?” Is it still in an experimental phase, discovering what is the message of this medium, as pertains to language? Videogames feature prominently in this collection as well. Does that mean that e-literature is blending with one of the oldest modes of artistic expression in digital media?

Whatever the case may be, this and the previous collection are a record of a global phenomenon, with works in multiple languages from all over (but not from Korea?). There is still so much to discover and recover because not every writer of dancing signifiers has been represented in these collections.

It is time to read and write about some of those who didn’t get included. Perhaps they’ll find their way into a future Volume 3 of the Electronic Literature Collection. 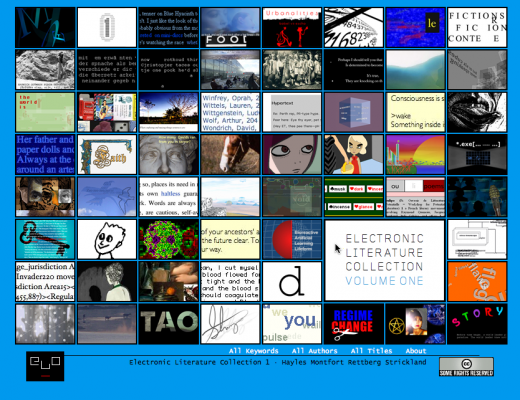 Upon completing my reading of the poetry in the Electronic Literature Collection, Volume 1 (tagged as ELC1 in this blog), some numbers and reflection on the works within is in order.

The ELC1 contains 60 works of e-literature, 38 of which are classifiable as poetry. Some of these works are certainly on the margins of what one might consider poetry, but I chose to include rather than exclude when in doubt. The authoring software distribution for these works is as follows: