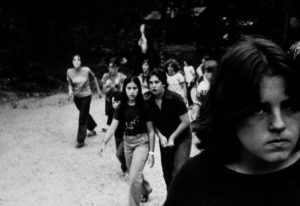 This webyarn takes us on a journey through the mind of the speaker triggered by ingredients while he explores his kitchen. The speaker makes a bizarre connection between seven ingredients (flour, pepper, sugar, salt, olive oil, vinegar, thyme) and his romantic relationship with a woman who has abandoned him. It is structured as a linear narrative that follows the same pattern with each kitchen ingredient: the revealing of the ingredient, the explanation its historical significance or its use in both positive and negative ways, a video is incorporated as a companion, and finally the connection between the ingredient, the speaker, and his relationship.

Similarly to another one of Bigelow’s works, “In a World Without Electricity,” the speaker of “The Seven Wonders” reconstructs past events in order to make sense of them. In the earlier work, the speaker reminisces over the death of someone close to him, while in “The Seven Wonders” the speaker examines his seemingly finalized amorous relationship with a long gone woman in the hopes of finding closure.

Each ingredient serves a purpose. The speaker is comparing each one to romantic relationship and its components. By doing so, in sixteen days the speaker comes to terms with the apparent end of his relationship. The flour represents the foundation any relationship should have, and without which it can crumble. Pepper is the most traded spice in the World which the speaker compares to how people use superficial love to spice up a burgeoning relationship. The speaker is implying that “love” has been cheapened and commercialized the same way pepper has. Next comes sugar and so on with the remaining ingredients. The photos of the ingredients are in close, macroscopic scale, comparable to the way the speaker is analyzing his relationship, and also evoking the monumental Seven Wonders of the Ancient World. The GIFs represent the journey the absent lover is taking starting at the Niagara Falls and ending…

Well that’s for you to discover, dear reader.

This minimalist e-poem  influenced me greatly in my development into an e-lit scholar. When I first encountered this poem in 1999, I was impressed by its use of colorful pop up windows in different sizes and positions to illustrate how one can be alone, even when surrounded by others. The distinctive features of each window yield to a common look and feel as the all become the same in color and message, as seen below. 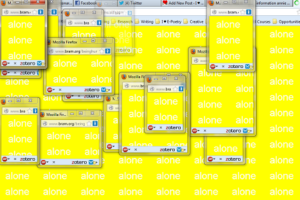 The yellow words that take over all the windows is a background image– an animated GIF alternating the word/phrase “alone” and “all one.” This repetitive sequence resonates with E. E. Cumming’s spatial juxtaposition in “[l(a]” because both poems provide compelling images of loneliness. Whether you are a leaf falling from a tree, detached (in death) from the company of other leaves, or a window surrounded by 15 other windows for a little while only to be left alone, in the end you are bound to feel “one.”

This bot mines the Twitter stream for phrases starting with “when,” extracts the clauses, and joins each phrase with a randomly selected animated GIF in a Tumblr. Here’s a more detailed description from Parrish’s blog:

A “#whatshouldwecallme-style tumblr” is one in which animated GIFs are paired with a title expressing a circumstance or mood—usually a clause beginning with “when.” I wrote a Python script to make these kinds of posts automatically. Here’s what it does:

(1) Search Twitter for tweets containing the word “when.”
(2) Extract the “when” clause from such tweets.
(3) Use Pattern to identify “when” clauses with suitable syntax (i.e., clauses in which a subject directly follows “when”; plus some other heuristic fudging)
(4) Post the “when” clause as the title of a tumblr post, along with an animated GIF randomly chosen from the imgur gallery.

This fascinating poem is derived from Gertrude Stein’s poetry throughout her career and exemplifies the practice of what Kenneth Goldsmith calls uncreative writing. As he explains in his essay, Reed sought to map out a “landscape” of Stein’s practice, so he devised the following algorithm to generate nine texts from Gertrude Stein:

I came up with the following procedures.

This scheduled poem is built around a quote from James Elkins’ 1999 book, The Domain of Images, in which he analyzes the blurred boundaries between images and writing. In this quote, he is focusing on a piece by Chu Ta (also known as Bada Shanren) in which a Chinese character is written / drawn in way that it can be simultaneously looked at as a flower and read as a word. The conclusion of Elkins’ analysis of this piece seems to have provided inspiration to Bell:

Visually, Bell is overlaying different typographical expressions of the same quote by Elkins: one in a serifed font and another smaller one in a sans serif font. Close attention to the differences between the two fonts, reveal how painterly serifs can be. The line breaks are also different, cutting prose into poetry. The scheduled presentation of this piece is used to add layers of formatting, such as italicizing the book title, or adding lines of color, or a handwritten text at the bottom of the window.

Bell is adding a few brushstrokes to the text, making it his own.

This selection of six poems built with a type of composite image known as animated GIFs used to create the earliest animations in the Web. In Zervos’ experienced hands (see his “Dimocopo” suite), this simple technology can be very expressive indeed, as can be seen in “Divorce” a kinetic concrete poem that uses moving typography to highlight some of the finer points in a divorce process.

These two brief hypertext poems appear as items 3 and 4 in the list of featured works by Mary Anne Breeze (best known for her nom d’ordinateur, Mez) inCauldron & Net, Volume 2. These works exemplify two other aspects of her poetic practice: an interest in the body, particularly as meshed with programming, which she also uses to shape her works.