What is American e-poetry?

The first step towards a response is to delimit what is meant by “American.” For the purposes of this categorization, I will define it as e-literature created or co-created by authors born and/or raised in the United States of America. The focus on birth and/or national identity helps find common ground for American writers who live around the world. In a globalized world, full of digital media that encourage collaboration, national boundaries become blurred and the focus shifts towards convergent characteristics, practices, themes, and poetics.

@weecalrobot MARTINS FOR THE MARTIN GOD! NEARNESS FOR THE NEARNESS PRESIDENT

Poetry is traditionally conceived as a refined, patterned and stylised language produced by skilled writers and orators. Not so for twentieth-century German philosopher Martin Heidegger. His highly influential and counter-intuitive philosophy, encapsulated in the dictum “language speaks man”, suggests that poets do not make poetry, but poetry poets. It is not a question of self-expression, but of “listening” for language’s “call”. According to Heidegger, this “call” takes us beyond the “mortal” towards the “heavenly”, “the Unknown One”, “god”. I wonder, then, what he would make of @godtributes, a charming little Twitter bot that “listens” to your tweet and “calls” it out back to you, transformed into an (ir)reverent tribute to an incidental, aleatoric deity.

In the 1980s, the world saw the introduction of personal computers (PCs). While the first creative stage of electronic literature took advantage of mainframe computers, only accessible in institutional environments, the context in which Silvestre Pestana created his first computer poems was totally different – a new wave Pedro Barbosa ironically calls “poesia doméstica” [domestic poetry] (1996: 147). With personal computers, Silvestre Pestana programmed in BASIC, first for a Sinclair ZX-81, and then, already with chromatic lighting, for a Sinclair ZX Spectrum, three poems respectively dedicated to Henri Chopin, E. M. de Melo e Castro and Julian Beck, which resulted in the Computer Poetry (1981-83) series. Pestana, a visual artist, writer and performer – who had returned from the exile in Sweden after Portugal’s Carnation Revolution of April 25, 1974 – brought diverse influences put forward with photography, video, performance, and computer media. From his creative production, it should be emphasized the iconic conceptual piece Povo Novo [New People] (1975), which was remediated by the author himself in the referred series of kinetic visual poems, “video-computer-poems” (Pestana 1985: 205) or “infopoems” (Melo e Castro 1988: 57). By operating almost like TV scripts, the series oscillates between recognizable shapes – such as the oval and the larger animated Lettrist shapes, formed by the small-sized words “ovo” (egg), “povo” (people), “novo” (new), “dor” (pain) and “cor” (color) – and the reading interpretation of the words themselves: “ovo,” the unity, but also the potential; “povo,” the collective, the indistinct, the mass; “novo” and “cor/dor.” This play of relations translates the new consciousness, although painful, of a “new people” in a new historic, social and artistic period, one of freedom and action. In an interview, Pestana (2011) claimed having researched more than thirty languages, only to find in Portuguese the possibility of traversing the singular and the plural, the individual and the collective, the past, present and future, by just dislocating a letter: ovo/(p)ovo/(n)ovo.

Doménico Chiappe, a Peruvian-Venezuelan writer and a journalist currently living in Madrid, has written and produced two delightful works of electronic literature: Tierra de extracción (1996-2007) and Hotel Minotauro (2013-2014). His works depict a critical and pleasant voyage to diverse Latin-American landscapes where poetry within prose, and prose within poetry, submerge the reader into hypermedial embedded narratives.

Barbosa’s theoretical-practical trilogy closes with Máquinas Pensantes: Aforismos Gerados por Computador [Thinking Machines: Computer-Generated Aphorisms] (1988), as it can be understood as the third volume of A Literatura Cibernética. Here, the author presents a long series of literary aphorisms, in which the generation of texts is said to be “computer-assisted” (Computer-Assisted Literature) in BASIC language. The “A” series (Re-text program) deals with combinatorial “re-textualizações” [re-textualizations] (1988: 59) of a fragment (“matrix-text”) by Nietzsche and the “B” series (Acaso program), which had been partially published in the Jornal de Notícias (1984), draws upon the conceptual model created by Melo e Castro’s poem “Tudo Pode Ser Dito Num Poema” [Everything Can Be Said in a Poem], included in Álea e Vazio [Chance and Void] (1971). Melo e Castro himself would write an early review on the aphorisms, in the Colóquio Letras (1986) literary magazine, revealing Barbosa’s outputs as undeniable literary productions. Finally, the “C” series (Afor-A and Afor-B programs) comprises reformulations of traditional Portuguese aphorisms, which result in new interpretations, sometimes ironic, sometimes surreal.

One of the most important features of these three volumes is the highlight given to computer code – showing the importance of programming for Pedro Barbosa – inasmuch as in the end section of each volume the author publishes all the source codes, which today becomes a rich and open archaeological finding, insofar it documents the coding practice and it enables further critical and creative analysis.

Read more about this work at: 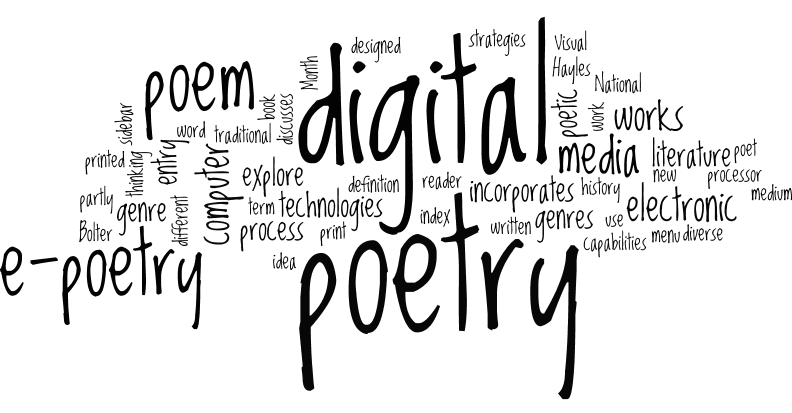 The tl;dr version: E-poetry is poetry that arises from an engagement with the possibilities offered by digital media. This site is full of examples, but here’s a simple one: “Puddle” by Neil Hennessy.

Now try printing it out. 🙂

For a more detailed response, I will reference my “Digital Poetry” entry for the Johns Hopkins Guide to Digital Media which I begin by discussing what e-poetry is, and what it isn’t.

In A Literatura Cibernética 2: Um Sintetizador de Narrativas [Cybernetic Literature 2: A Narrative Synthesizer] (1980), Pedro Barbosa advocates the same analytical perspective of literary machines, which he had begun in the first volume. Influenced by Max Bense and Abraham Moles, the author develops the idea of “artificial text,” which would be later challenged by E. M. de Melo e Castro (1987), in the sense that Castro’s transmedia stance considers that all texts, produced over time with the aid of various technological tools, are always artificial.

Note from the Publisher: Herberto Helder passed away on Monday, March 23, 2015. To honor his poetic legacy, we wish to celebrate one of his works with this entry by Álvaro Seiça.

Herberto Helder is one of the most consistent and innovative Portuguese poets of the second half of the 20th century. Even if his later œuvre has been marked by a traditional experimentalist reworking of crafted language, whose poiesis engages with a very idiosyncratic vocabulary, one should not forget Helder’s eclectic trajectory. Having been influenced by, among other movements, Surrealism and international avant-garde experimentalism, Herberto Helder was, firstly together with António Aragão (1964), and secondly with Aragão and E. M. de Melo e Castro (1966), the editor of two important anthologies or cadernos (chapbooks), Poesia Experimental 1 [Experimental Poetry 1] and Poesia Experimental 2 [Experimental Poetry 2]. Both these anthologies opened up most of the major pathways of literary and artistic experimentalism in the 1960s, from which the PO.EX (Experimental POetry) movement emerged. Several genres, formal and thematic threads were originally tried out in these two anthologies and further work of the movement, namely concrete and visual poetry, ‘film poetry,’ sound poetry, ‘object-poetry,’ ‘poetic action’ and happening. As Helder points out in the first editorial (“Introdução”) of the cadernos:

Pedro Barbosa’s pioneering work introduced computer-generated literature (CGL) in Portugal in 1975. Having worked with Abraham A. Moles at the University of Strasbourg, Barbosa published three theoretical-practical volumes of his programming experiences with the FORTRAN and BASIC languages. These volumes deal with combinatorics and randomness, developing algorithms able to ally computing and literary production, bearing in mind a perspective of computational text theory.

According to the author, A Literatura Cibernética 1: Autopoemas Gerados por Computador [Cybernetic Literature 1: Computer-Generated Autopoems] is an “esboço de uma teoria, toda uma prática, dois métodos e dois programas, que irão facultar a qualquer leitor, interessado e imaginoso, a confecção de poemas automáticos à razão de 5200 versos por hora: no espaço intraorgânico de qualquer computador!” [outline of a theory, an entire practice, two methods and two programs, which will provide any interested and imaginative reader with the possibility of making automatic poems at the rate of 5200 verses per hour: in the intraorganic space of any computer!] (1977: 8) These “auto-texts,” or “computer-generated autopoems,” hitherto open up a new field of literary theory in the Portuguese context – the direct junction of literature and computation, of writer and programmer. Barbosa’s autopoems were programmed in FORTRAN, ALGOL and NEAT during 1975-76 (Permuta program, Iserve subprogram, and Texal program, Aletor subprogram), using an Elliot/NCR 4130 (a machine introduced in the 1960s in the UK), in collaboration with Azevedo Machado, engineer at the Laboratório de Cálculo Automático [Laboratory of Automatic Calculus] (LACA), at the Faculty of Sciences from the University of Porto.

In A Literatura Cibernética 1, Barbosa compiled a selection of textual outcomes generated with his programs: the permutational poems and the random poems. On the one hand, the permutational poems include “Poema de Computador” [Computer Poem], “25 de Novembro” [November 25], “Verão” [Summer], “Silêncios” [Silences], “Cansaço das Palavras” [The Weariness of Words] and the subtitled poems “trovas electrónicas” [electronic ballads], “Porto” and “Aveiro” (8! = 40,320 permutations, 576 verses, running time: 6’ 54’’), exchanging the morphemes “na” (in), “da” (of), “sem” (without), “uma” (a/the) and the lexemes “água” (water), “ria” (estuary/river), “tristeza” (sadness) and “alegria” (happiness). Aveiro, a city famous for its water channels, is portrayed with the opposites “sadness/happiness” and “water/river,” to the extent that the noun “ria,” when a verb, means “laughed,” giving rise to its opposite, “mágoa” (sorrow), through the rhymed interplay with “água” (water). On the other hand, the random poems appropriate, remix and rewrite poems by other poets. Here, one finds the “Transformação” [Transformation] series, with “Camões e As Voltas que o Computador (lhe) Dá” [Camões and the Turns the Computer Gives (It)], which rewrites a Renaissance text (“classic”) with several random transformations of Luís de Camões’s Os Lusíadas [The Lusiads] (1572), and “É Preciso Dizer…” [One Needs to Say…], an appropriation and re-creation of Mário Cesariny’s surrealist poem (“contemporary”) “Exercício Espiritual” [Spiritual Exercise] (1956), in which Barbosa extends the ironic and surrealist practice of the initial lexicon of nouns.

What surfaces from the resulting versions of the poems, in addition to the achieved syntactic accuracy and the meticulous encoding work, is a luminous mark of criticism, irony and parody, both to the current state of the official literary canon, and, above all, to the climate of oppression and fear (“medo”) inflicted by the long dictatorship, which was still being felt. Conversely, questioning the perpetuation of a political, social and cultural lie (“mentira”) was the likely path to be renewed by the recent establishment of the Portuguese democracy – history (“história”) as continuity and revolution (“revolução”) in the confrontation between human and machine.

Read more about this work at:

E. M. de Melo e Castro has written poetry in different physical media – in the same way as “peso pesado do átomo” [atom’s heavy weight] (Castro 2006) – such as paper, textiles, canvas, wood, metal, stone, plastic, early opting for a dematerialization of word and image, something that became apparent, from the outset, in the pioneering videopoem Roda Lume [Wheel of Fire] (1968). This dematerialization of the artwork was taken as a guideline for the retrospective exhibition “O Caminho do Leve” [The Way to Lightness] (2006) at the Serralves Museum of Contemporary Art, in Porto. Melo e Castro states: