A thrilling courtroom drama delivered through a medium which blurs the line between visual and textual narratives, Ace Attorney, whose first release in 2001 proved unexpectedly popular in the West, can be counted among the works most responsible for bringing the visual novel paradigm to the mainstream. It, along with selected others which can be strictly categorized as true “visual novels”, such as:

…are most easily described as text-based adventure games which require minimal player input, since visual novels are formally labelled as ‘computer games’ by society at large. In practice, however, they are essentially a novel-length narrative retold through text and animation.

Nanette Wylde’s Storyland (2002) is a digital work that produces recombinant narratives within a frame that seeks to evoke the ethos of a circus performance. Each story within Storyland opens with a black screen, the title of the work lighting up in a randomized configuration of multi-coloured letters to a shortened subsection of of Louis-Philippe Laurendeau’s ‘Thunder and Blazes’ (1910), a small-band reworking of Julius Fučík’s Opus 68 march, ‘The Entrance of the Gladiators’ (1897). The stories within Storyland follow a basic six paragraph template, and are refreshed each time the user presses the ‘new story’ button. Each time this button is pushed, the page refreshes by playing its music again and produces elements in a new combination in order to tell the user a different narrative, seemingly depicting a whole new performance, although elements of the previous tale are displaced and repeated within each new tale.

myBALL is a Flash based mock product site that satirizes a kind of sales pitch commonly found in the web. By clicking the initial slogan “The future of robotic toys is now” we enter the wonderful world of corporate parody and get to know myBALL. 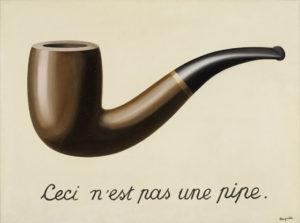 This poignant poem uses music, scheduling, and slight textual animation to tell the story of a shy boy. The arrangement of lines in time and space lead readers to experience the poem cinematically and spatially. Each line— and portion of a line— adds a layer to the “shy boy” it describes, leading the reader into an experience of the work as designed by Swiss. The story’s sadness is enhanced by the scheduling and music as each little portion adds to its tone. Wear headphones for a more emotionally powerful reception of the poem and be patient with its delicate pace to experience it in all its heart wrenching simplicity.

This is a poem that uses language and code in textural ways. The letters are arranged in a light grey color on a white background clustered so densely that only a few words that jut out are readable. Three squares trigger a dark grey image to appear under the words, which creates more contrast for increased legibility, but it is not a true improvement. The few words one can make out are snippets of code, which might be an invitation to see what is in the source code. 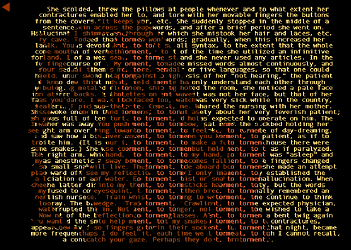 This responsive poem installation is inspired by the Anna O., a patient of Joseph Breuer’s, whose publication of research on her treatment with Sigmund Freud led to the birth of psychoanalysis and the “talking cure.” The installations documented in this link demonstrate the idea by providing an image of her words splashed across the screen and an image of her face reveals other layers of language that lie beneath the surface of the image. This enacts Freud’s theories about the unconscious and repression by using the image as a kind of window into two or three layers of language. On the top level, we can read the work, noting that the speaker has a steady tone, reading two more levels of text, each revealed by a different part of the face. The installation provides better opportunities for setup and interaction, but you get the ideas well from the documentation.

As her libido’s cathexis continues to bubble up in her eyes sockets and hair one must wonder whether she is cured or not.

These three poems by Nick Montfort take an ancient literary and cultural tradition, the riddle, and brings them into the digital age by using CGI scripting to allow readers to guess the response without the riddler needing to be present. The poems provide a simple input cue: a text box where the reader can type in their guess and a button that submits that response to a script, which checks the answer for a match and sends a response, whether it was correct or not. This script was probably written in Perl, a programming language Montfort uses extensively, particularly in his “ppg256” series of poem generators. Part of the interest in this choice of scripting language is that he is able to keep the answer hidden from readers, even from those who like to take a peek at the source code (like me). It also means that he could design a riddle without a correct answer, enacting what Philippe Bootz calls “the Aesthetics of Frustration.”

But what is the point of a riddle? Is the pleasure in the answer in puzzling over the question?

This multimedia poem gives a voice to a body and mind imagined through computational conditions. Mary Anne Breeze / Mez / Netwurker has developed a language practice known as mezangelle, which she uses in this poem to create a cyborg lyric voice. The implied metaphor in the title is that data has a body and it is bleeding, perhaps it has been wounded. Mapped onto electronic texts, the displayed texts are the skin, while the code is the rest of the body, including the blood. What we read is a combination of computer and natural languages, both of which are executable.