Since 1986, besides videopoetry, E. M. de Melo e Castro worked on a series of experiments with other computer media (suportes informáticos), coined by the author as “infopoesia” [infopoetry], in which he used image editor software. Once more – and this is a fact the analysis by Jorge Luiz Antonio (2001) does not highlight – the prevailing choice of image editors at the expense of word processors reveals the visual affiliation of Castrian poetics. The infopoems’ visual animations acknowledge pixel as the primary unit of meaning, in the perspective of an infopoetic language. Some of the resulting images were published in Finitos Mais Finitos: Ficção/Ficções [Finite Plus Finite: Fiction/Fictions] (1996) and Algorritmos: Infopoemas [Algorythms: Infopoems] (1998), whose initial essay develops “a pixel poetics” and explains the amalgams created in the title. The quest for transgression, which is underlined by the book’s title (1998), is followed by the quest for formal synthesis:

When Jim Andrews published these poems in Cauldron& Net, Volume 1 in 1999, their original DHTML and JavaScript codes were compatible with the two main Web browsers of their time: Netscape Navigator 4 and Internet Explorer 4 (IE). This was during the peak of what is known as the “first browser war” in which IE became the dominant browser in the market. At the time, each browser was implementing code differently, creating code incompatibilities that led to the practice of detecting browsers to redirect readers to different versions of the document, or determining what part of the code was executed in a specific session. Some writers opted to pick a browser and directed readers to view the work on that one, while others sought cross-browser compatibility. 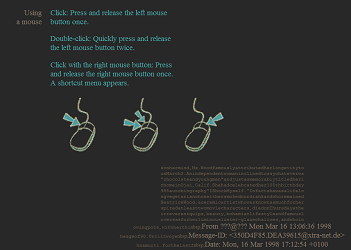 Open “Poem by Nari does Windows” by Ted Warnell

This hypertext poem examines language and instructions from help menus and other documentation in the Windows 98 operating system, juxtaposing it with texts and images from other sources (credited in “Windows”) as well as with original material. The formatting for the Windows texts is designed for readers to read them clearly, allowing for Microsoft’s prosaic, utilitarian voice to emerge clearly and deliver instructions for procedures that seem unnecessarily complex. The “Poem by Nari” texts (Warnell’s poetic persona) are made strange and poetic through visual formatting: primarily by eliminating spaces between words, arranging streams of texts in columns, and capitalizing by constraint rather than by convention.

Explore these texts as ambient works designed to create a mood, using language to produce a textual and textural conversation between Microsoft and Poem by Nari’s voices.

This collections of four hypertext poems are organized around each of the four elements of old. The primary techniques that guides these works is collage and pastiche because each work is built from images (mostly by Dave McKean) and textual excerpts from other writers, with the exception of “Fire,” which Sanders wrote. The pieces are structured linearly, which means that each page has a link to the next until one reaches the end of the sequence. One piece, “Air” doesn’t have links, but uses the meta refresh tag to load the next page in the sequence every 5 seconds, perhaps to create the sense that one is being carried by a gentle wind from one page to the next. The combination of images and pithy lines and silky smooth prose poems create an oddly refreshing experience of the Web, as the minimalist design and sense of assembled Web objects— most of the texts are images of texts, which are computationally very different objects.

With the title’s use of the word “possessions,” the use of images for texts, and a detailed credits page, Sanders foregrounds the creative side of borrowing and assembling to create a work with a remarkably coherent vision and sense of originality.

This delightfully creative website contains more than can be easily labelled as poetry, art, or narrative, though it certainly contains that and more. Launched in 1998, the site incorporates multiple Web technologies (see tags below) in very coherent fashion to create a hypertext of musings, anxieties, joys, searches for companionship, yearnings, and more navigable through interfaces populated by a variety of insects. Each page in this hypertext is a discovery: a thoughtful exploration of an idea through art, language, and metaphor.

Using frames, pop-up windows, animated GIFs, error codes, forms, and pop up menus, this suite of 10 short e-poems written between 1998-2000 by Vietnamese poet Duc Thuan are a snapshot of the pre-2000 Web and its concerns. The interface is minimalist, evoking the title, and the works themselves are simple to operate yet their content suggests an ironic relation to the title. From the opening, Thuan establishes an aesthetic of code and malfunctioning in “Crash,” an idea explored throughout the suite in poems like “The Hidden and the Shown,” “Interact,” and “Interact.” “Imaguage of Consciousness” accompanies images of Web advertising banners along with jarringly loud music to warn us of directions we should avoid. The final poem “Diary of a Drunkard I Only Met Once” uses the simple interface of nested menus to organize a poem in way that provide multliple reading possibilities and stanzas embedded within lines, something evocative of Jim Rosenberg’s work.

These are deceptively simple works, worthy of focused attention to appreciate their complexities. 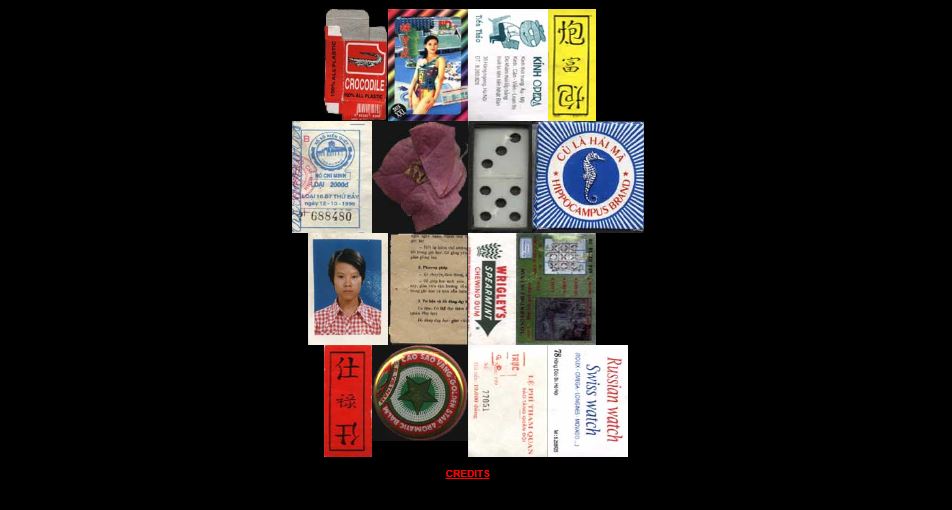 This award winning group of sixteen poems about a trip to Vietnam are organized hypertextually as a cluster of images of little odds and ends: a candy wrapper, a ticket, photograph, and so on. Each image will lead you to poems, short Shockwave animations, visual poems, hypertexts, a set of images, all experiences that will lead you to reflect on the politics, poverty, and culture of Vietnam.

This award-winning long poem by Cayley shifts in and out of intelligibility as it morphs from one stanza to the next, one group of letters at a time. Yet even when the traditional meanings of words are left behind, the generated words gesture towards meaning, especially as the synthesized voices read them aloud.